Day 1b of the 2011 PokerStars.it EPT San Remo Main Event has concluded. The second starting flight attracted another 477 players. That grew the total field size to 837 and generated a prize pool worth €3,734,694. After the first eight levels of play, Day 1b was topped by Taylor Paur. He bagged up 188,200 in chips and will take the overall chip lead into Day 2.

The tournament room was very alive all day long and plenty of notables were in the mix as always. Team PokerStars Pro was very well represented with likes of Johnny Lodden, Vanessa Selbst, Fatima Moreira de Melo, Salvatore Bonavena, Sandra Naujoks, Matthias De Meulder and Eugene Katchalov. All of those stars have advanced to Day 2 as well their teammate, and former EPT San Remo champion, Liv Boeree.

Back in April 2010, Boeree captured this very title and the €1,250,000 first-place prize that went along with it. She's still ticking in the event and will be doing all she can tomorrow to make a second San Remo title a reality.

Those who are out of the running for this Main Event include Jamie Rosen, Shawn Buchanan, Jake Cody, Martins Adeniya, Eddy Sabat, Matt Waxman, Patrik Antonius and James Mitchell.

In this marvelous event, the top 128 spots will be paid out. Just squeaking into the money will earn a player €7,000, but they're all gunning for the €800,000 top prize that will be handed to the winner. Day 2 will commence at 1400 CET (0500 PDT) tomorrow and the PokerNews Live Reporting Team will have all the coverage.

The players are now bagging and tagging. We'll have a recap coming for you shortly.

PokerStars and PokerNews have come together to offer you an exclusive poker league where PokerNews players will fight it out for cash prizes, league points and those all-important bragging rights.

Download PokerStars to play in the exclusive $10,000 PokerStars PokerNews League with weekly added prize pools and a league point leaderboard playing toward a $10,000 free added final!

The league is open for all Pokerstars players. Just check the League Page for passwords!

There are also Regional Leagues. Please check which league is open for you.

If you don’t already have an account, download PokerStars now. Remember to use the marketing code "POKERNEWS.COM" and special bonus code "TIME" to get an additional tournament ticket worth $5.50 if you deposit $30 or more until October 28, 2011.

checked through, and the river came the

It was no good. Cantu tabled

for the full house, and he'll drag a huge pot. We'll call it 180,000 now, but his chips are still in piles in front of him, and we'll have to wait until he stacks up to count him down better.

"Merry Christmas, sir," Salman Behbehani said from across the table.

Because it just wouldn't be an EPT without a nationalities pie chart from Mad Harper. 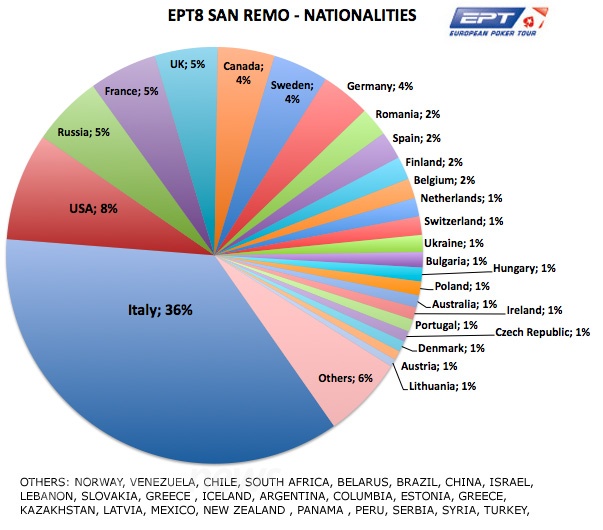 Dominik Nitsche just gave away 19,950 in chips after he doubled up Eirik Gjerdevik. The two got all of the money in preflop with NItsche holding the lesser

. The flop, turn and river ran out

and Gjerdevik won the pot.