Holz Busts Jacobson in Monster Pot to Jump Up the Counts

Flush Over Flush Sends Ivey Out the Door

Hands 7-10: Greenwood and Tollerene Chop It Up

Hand #7: Jason Mercier on the button with

opened and took down the blinds and antes.

Hand #8: Fabian Quoss in the small blind limped in. Ben Tollerene in the big blind checked his option. They took a flop of

and Quoss checked. Tollerene, having his hand shown as

on the river had both players checked. Quoss showed

and took it down with the flopped full house!

Hand #9: Action folded to Ben Tollerene in the small blind and he raised to 60,000 with

Hand #10: Sam Greenwood shoved all in under the gun for 388,000 to play his first hand of the day. Ben Tollerene on the button asked for a count and, with just a few seconds left to act, shoved all in.

and Sam needed some more hearts to double. The

on the turn was a good card, but the

on the river didn't complete Greenwood's flush and the two of them chopped the pot.

Hand #6: Connor Drinan shoved all in from the button and Fedor Holz hit the tank on the button before calling off for 172,000. Both blinds folded and the cards were turned up.

turn was a blank, and so was the

Holz was in the tournament for three bullets, meaning he actually lost money in this tournament.

Hand #2: Fabian Quoss limped the small blind with the

and Ben Tollerene checked his option from the big with the

. Both players checked, the dealer burned and turned the

, and Quoss tossed out a bet. Tollerene quickly folded.

and won the blinds and antes.

Hand #4: Action folded to Connor Drinan in the small blind and he raised to 185,000 to put the pressure on Holz, who folded from the big.

Hand #5: Jason Mercier received a walk in the big blind.

Hand #1: Connor Drinan raised from the hijack with

. Drinan shoved all in and Quoss instantly made the call.

and in the first hand of the finale, Drinan doubled Quoss.

The Finale Has Started

Our hand for hand coverage starts in about 30 minutes, to prevent spoilers for people following along with the live stream. 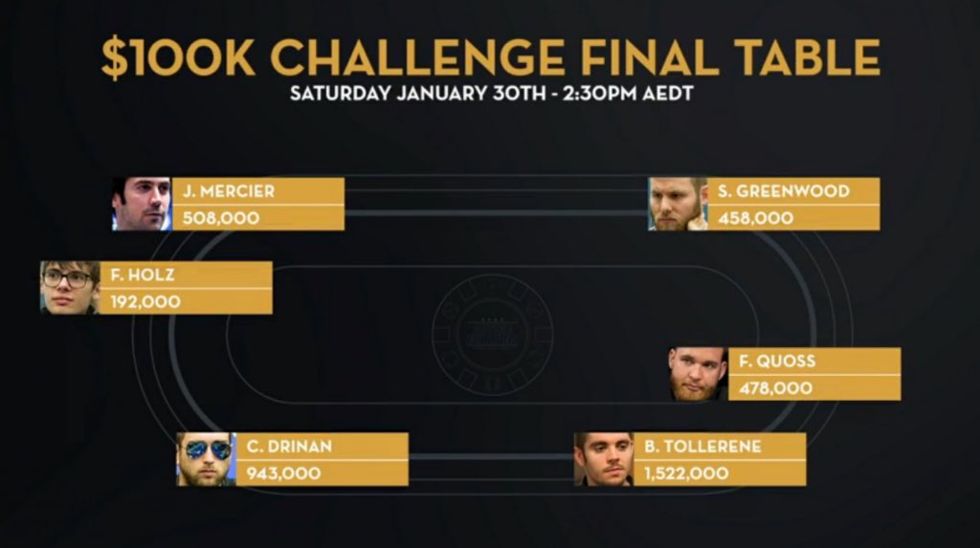 Second place in the chip counts to start the final day of the 2016 Aussie Millions $100,000 Challenge belongs to Connor Drinan. Despite boasting an impressive pile of live tournament results totaling nearly $7.65 million in winnings, Drinan's biggest poker moment — or at least the one he's most recognized for — would be when he lost with his own pocket aces to the pocket aces of Cary Katz in the $1 million Big One for One Drop at the 2014 World Series of Poker.

Although that would be a huge hit to take, Drinan has done just fine for himself in the time since. One of the results he's posted recently was a third-place finish in the $500,000 Super High Roller Bowl at Aria in Las Vegas for $3.225 million. Another recent score saw him finish runner-up to Steve O'Dwyer in the 2016 PokerStars Caribbean Adventure $50,000 Single-Day High Roller for $870,625.

Drinan is from Illinois and will enter the day with 943,000 in chips.

The shortest stack returning to the final day in the 2016 Aussie Millions $100,000 Challenge is Fedor Holz. He's also the youngest player of the bunch and will bring 192,000 in chips to play.

Holz got his first big breakout when he won the 2014 World Championship of Online Poker Main Event on PokerStars for $1.3 million playing as "CrownUpGuy." That name seems quite fitting as Holz is in the money and looking to make a big splash if he can run it up in this event at Crown Melbourne.

After that big win online padded Holz's bankroll and helped put his face on the map, Holz took to the live tournament scene. He's since all but taken over the poker world, amassing over $7.35 million in live tournament earnings in a short period. Most recently, Holz win the World Poker Tour Alpha8 $100,000 Super High Roller at Bellagio in Las Vegas for nearly $1.6 million in December. He followed that victory up with another huge win, this time for more than $3.46 million, in the Triton Super High Roller Series $200,000 Cali Cup at WPT Philippines in January.

Holz also booked a deep run in the 2015 World Series of Poker Main Event, finishing 25th for $262,574 and getting a ton of air time on ESPN thanks to his recent success and highly-aggressive play.

Another man who needs little introduction is Jason Mercier. A member of Team PokerStars Pro, a European Poker Tour champion, and a three-time World Series of Poker gold bracelet winner, Mercier is in the argument for best poker player in the world right now. He boasts nearly $16 million in live tournament earnings and has three different seven-figure results.

A resident of Florida, Mercier is making his third cash in an Aussie Millions event and will enter the final day with 508,000 in chips.

Sam Greenwood's run to the final six of the 2016 Aussie Millions $100,000 Challenge comes in a timely manner, as it takes place in the first month of the new year following the one that saw him truly break out with more than $2 million in earnings and several top results.

All told, Greenwood had seven six-figure scores last year and many cashes from big buy-in events.

While he has been around for a few years now, Greenwood has always seemed to be in the shadows of his brother, Max. This final table appearance, when combined with the impressive string of results he put together in 2015, has really vaulted him into the spotlight.