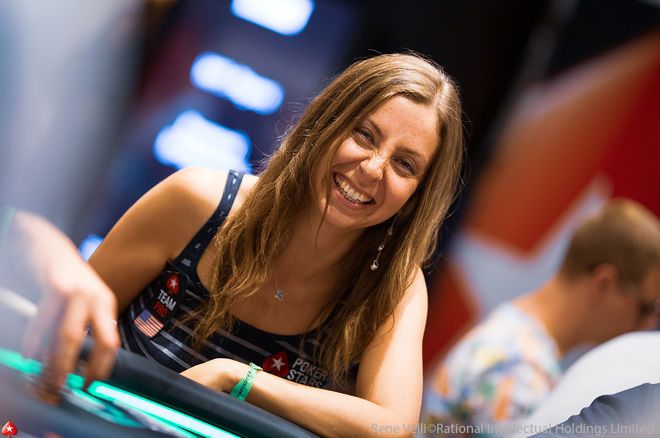 "Never go broke in a limped pot.” That’s the old adage and no doubt that’s one of the many lessons that Maria Konnikova learned from her coach Eric Seidel on her way to becoming a professional poker player. In this hand from ‘Poker Night In America’, the best selling author of ’Mastermind’, ‘The Confidence Game’ and the new smash hit ‘The Biggest Bluff’ took a lot-control line after flopping bottom two pair.

The action starts with Maria limping into the $50 straddle from the $25 big blind with 5h 6c. Antimony checks her option with 9s 6d. The trio discuss the merits of a limping strategy and overall range construction.

The Flop is an action flop - it comes 9h 6s 5c. Maria bets $50 into $125. Anna raises to $225. Maria calls. The issue of stack depth is discussed and its impact on Maria’s decision. With a shorter stack, she would have been inclined to 3bet but playing effectively 230bbs deep, it makes more sense to call out of position and take it to the next street.

The turn is the 4s bringing 2 spades. They consider the importance of this card and how likely it is that Anna might have been semi-bluffing the flop with the double-gutter 73 which got there. Maria feels like it is unlikely. She checks and Anna bets $400 into $575.

Dara agreed with this line. Maria’s hand is way too strong to fold and no longer strong enough to raise. He explains the limitations of PIO solver when stacks are this deep and how sometimes with solvers you have to simplify the input to get them to produce interpretable data.

The river is the 10s, completing the backdoor flush. Maria checks and Antimony bets $800 into $1375. Maria doesn’t love it but she makes the call and gets the bad news. David asks if she can actually get away on the river, given Maria’s read that Anna was unlikely to be bluffing and the low relative value of bottom two pair on a straight and flush board. Maria explains how her problem is that while Anna is unlikely to be bluffing, she is likely to value-bet a hand like Q9.

A further discussion ensues on the key moment being the flop decision to call the raise rather than 3bet. Ultimately that saved Maria from losing a much bigger pot.

The Chip Race is a weekly podcast sponsored by Unibet Poker (@UnibetPoker). The show is currently on hiatus after finishing its 12th Season with a finale that featured Jon ‘Apestyles’ Van Fleet, Alex Scott and Fedor Holz. It returns to the airwaves on July 20th with an episode featuring Lon McEachern, Chris Da Silva and Dan Smith. The show is available on Apple Music, SoundCloud and Stitcher.

Follow @daraokearney, @dklappin and @thechiprace on Twitter and, if you want more from two of the game’s best and most prolific content creators, be sure to check out their entertaining new spin-off web show ‘The Lock-In’. It features one guest and has a looser format with lots of banter, anecdotes and deep dives into what’s going on in the poker world. Their guests so far have been Niall Farrell, Jennifer Shahade, Gareth Chantler, Jack Sinclair and Barry Carter and their next show our next Monday will feature Jamie Kerstetter. You can check it out here.

Get Your Grind On For the €52K Unibet Summer Bootcamp