Seems Risky: A Three-Barrel Bluff for Your Entire Stack in WSOP Main Event 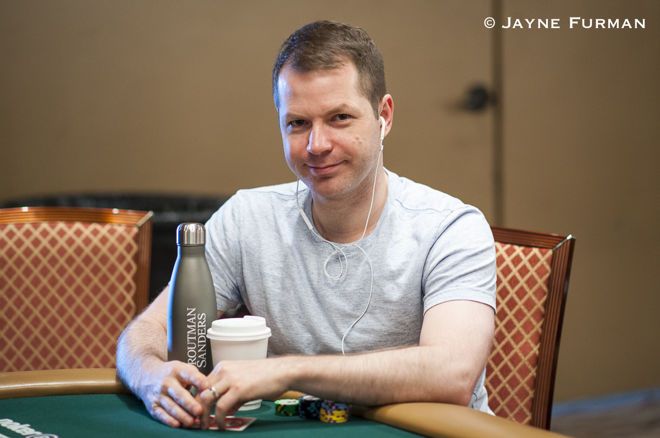 Few things are as exciting, or risky for that matter, as a three-barrel bluff in poker. It takes heart, commitment, and the ability to set fear aside. When executed in the World Series of Poker Main Event, the intensity is amplified considerably.

in the hijack with 83 BBs in my stack.

This is a situation where you can either raise or call, I think either play is fine. With the offsuit cards, I tend to lean towards a three-bet. That’s because the suited hands play a little better than the offsuit hands postflop. I don’t mind taking this down preflop, and if they call I can still flop a big pair. Plus, if you never three-bet bluff it makes your opponent’s life easy when you do three-bet.

"Neither player connects very well at all on this flop, which means the three-bettor usually has a bit of an advantage."

So, we do three-bet to 20,000, the original raiser calls, and the flop comes down

. Our opponent checks, and if I bet I’m going to put my opponent in a tough spot immediately if he doesn’t have a pair. I decide to bet 20,000, which is what I’d do with my entire range. Neither player connects very well at all on this flop, which means the three-bettor usually has a bit of an advantage.

Our opponent does call and the turn was the

, which our opponent checked. Not it's decision time. Do I bet the turn and river to try and get my opponent off a hand like jacks or an ace-high, or do I check and concede the hand?

Do you really want to be three-barrel bluffing off your stack in the WSOP Main Event? Well, my range is aces, kings, and queens, maybe an ace-three suited, right, but it’s important to have some bluffs every once in a while. I do bet 40,000 into 87,000. This is essentially setting up a river jam. If my opponent calls the pot will go up to 167K and I have 170K behind.

The river is the

and our opponent checks. Suddenly I went from planning to bluff the river to wondering if I should value-bet the river instead. The problem with jamming for value, I don’t think my opponent will call with a hand like jacks, but he might call a bet like 70K.

I go 78K on the river, which I think is a tiny bit too big but still a fine value bet. Unfortunately, I get jammed on, and like I often say, no one is ever check-raise bluffing on the river. The problem is, shouldn’t my opponent be worried about the fact that I have pocket kings? What in the world is my opponent check-jamming with? He should really only jam with full houses. Pocket eights are the only hand that makes logical sense, pocket kings too but there’s only one combination of those. He shouldn’t be jamming with aces.

There are a lot of missed draws, but like I said people rarely check-raise bluff on the river, so I think I have to fold, which is what I elect to do. Could I have played this hand differently? I could have checked on the turn, but I think once the king comes on the river I have to value bet.

Who knows, the king may have saved my tournament because if the river came something else I’m going to be jamming all in as a bluff and I could’ve gone broke if my opponent did have something like eights full.