Jonathan Little on Going for a Small, Large, or Gigantic Bet on the River 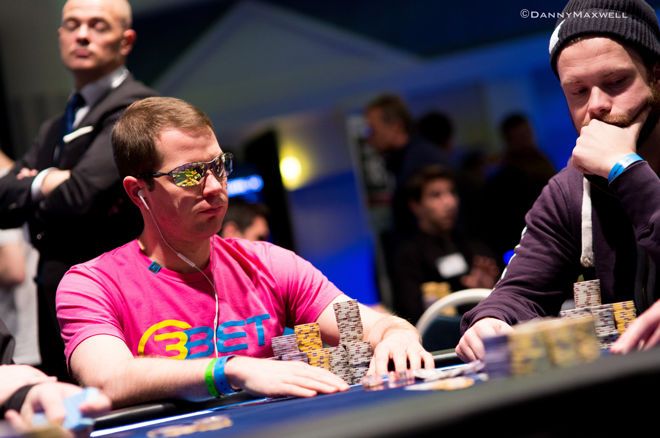 I was sitting with 26,000 and opted to raise to 1,600 first to act. Action folded around to the player in the big blind, who was a well-known, good pro sitting with 28,400 (47 BBs). I knew that particular player was not afraid to get in there and battle, and he did call to see the

I’m often going to continuation-bet frequently and small in this scenario, so I bet 1,600. I think this board is connected enough against the big blind caller that I probably should bet a little more, maybe 2,200 or 2,400. Regardless, my opponent called and the

appeared on the turn.

At this point, I’m concerned with how do I get the money in the pot. Right here, is there any way I can get the money in without scaring off my opponent? To get a pot-sized bet on the river, I need to bet something like 5,000 now and then I can jam the river for pot. That would be nice, but that said I think it’s better to go a little smaller on the turn because my opponent’s range should be kind of marginal. If he has a ten he’ll call any bet, but what about when he doesn’t, when he has a six or the like?

"I don’t logically have a super nut hand, so with the missed draws there’s a chance my opponent might think I’m bluffing if I do something a little bit weird, like making a giant all-in bet."

I wind up betting 2,200 and with hindsight, I think this is a little bit of a mistake. I was probably trying to induce my opponent to make a move at this pot, but as it happened he just called and then checked the

I do lose to a decent amount of hands now, but a lot of draws also missed. I don’t logically have a super nut hand, so with the missed draws there’s a chance my opponent might think I’m bluffing if I do something a little bit weird, like making a giant all-in bet. He could call light and pay off my aces.

I actually think shoving here might be viable against this type of player while betting 8,000 or a pot-sized bet would be more normal. Is there merit to making a small bet like 2,500? There is if I think my opponent has either a six or a busted draw, but notice with the seven on the river a lot of those draws have turned into a marginal made hand, which might pay off a little bit of a bigger bet.

While all three options were out there, I went big and moved all in for 20,600. It was risky because sometimes my opponent will roll over two pair and I'll be out of the tournament. This bet is either very good when an opponent calls with a ten, but bad when it folds out your opponent’s ten. That’s why it’s highly important to pay attention to your opponent and know their tendencies. Against this player, who I’ve played a lot, I like the big bet because I know they’re not afraid.

He does call with the

Are YOU Making These Common Bounty Tournament Mistakes?