5 Quick Tips to Help You Win Your Next PLO Tournament 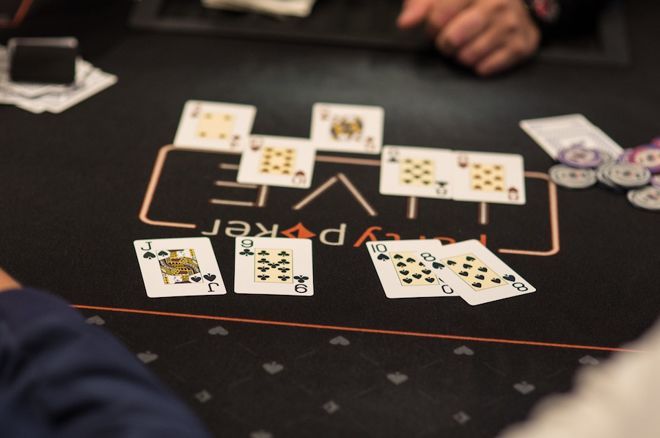 It's no secret pot-limit Omaha tournaments are getting more popular. All the big online tournament series such as the World Series of Poker, the recent WCOOP at PokerStars, partypoker's Powerfest, and other events like The Big Wrap happening right now at King's Casino are featuring more PLO tournament events than ever before.

This format can be incredibly fun for recreational players, and highly profitable for those that know how to play them well.

Whenever a new format is on the rise, new players will jump in to give it a try and to test the waters. In fact, in most PLO tournaments, you still won't find a lot of professional players. Most of them are playing PLO cash games because there are not yet enough tournaments running to play them full-time exclusively.

This means that the level of play in most PLO tournaments is overall quite poor and there are some serious edges to be found for those that put even a modest effort into learning proper PLO tournament strategy.

Here are five quick tips that have helped me to win more pot-limit Omaha tournaments.

In PLO tournaments, the biggest edges can be gained by playing at deep stacks against players who have little deep-stacked experience.

Pay close attention to the structure of the tournament. The more deep-stacked poker you can play, the bigger your edge can be. I recommend that you avoid playing turbo and hyper-turbo PLO tournaments as the edges in those fast formats is overall lower. The most profitable tournaments are the ones that start with deep stacks and that have very long blind levels. Especially during the bigger online series, you should be able to find PLO tournaments with great structures.

Check out the starting stack, but also how much the blinds increase at every new level. Focus on tournaments in which the blind levels slowly increase throughout the tournament.

2. Plan for an ICM Advantage

Many PLO tournaments will offer re-entries or re-buys during the early phases of the tournament. It can be worth it sometimes to increase the variance during this period in order to create a big stack so you can give yourself the best shot at reaching the final table and winning the tournament.

In pot-limit Omaha, ICM has an even bigger impact on strategy than in no-limit hold'em. Even when everyone at the table knows that the big stack player is opening very loose, they often can't do much about it. This is because of the way preflop and postflop equities are different in PLO versus NLHE.

In pot-limit Omaha, the equities of hands run closer together than they do in hold'em. Additionally, you can't raise more than the size of the pot. This allows your opponents to get to the flop and then stack off correctly more often, which you usually want to avoid when there's ICM involved.

In no-limit hold'em, there are also a lot more situations where there is a clear preflop equity favorite. Hold'em overpairs and dominating unpaired hands have such a high equity versus their dominated counterhands, it's usually worth it for the at-risk player to get it all in.

More importantly, in NLHE you can simply reshove all in preflop and give your opponent much worse odds to call. Combining that with the potential of being dominated, shoving all in is an effective method of shutting down wide openers with decently strong hands.

In PLO, you can only raise the size of the pot, and therefore the worst odds you can give your opponent on a call is 2-to-1. There's typically some money left behind for a flop shove where again, the big stack will get decent enough odds to call and potentially take your stack.

All of this means that unless the small or medium stack wakes up with a massive hand, they are almost forced to fold because ICM would dictate it's not worth it to fight back with smaller edges. Having a big stack should allow you to put a ton of pressure on the other players and pick up a lot of uncontested blinds. The effect can be extreme when there are multiple short stacks with similar stack sizes.

You can increase early stage tournament variance by raising and reraising big. If you want to increase the variance, you want to inflate the size of the pot. You can do this by three-betting more and by open-raising to the maximum preflop sizing. You don't want to take this strategy too far, however. Make sure that you are still playing a solid strategy and don't start to "gamble it up" just to get a big stack while you can still re-enter the tournament.

Keep in mind also that planning to re-enter tournaments often has consequences for your bankroll requirements. A $55 re-entry tournament might suddenly turn into a $220 tournament if you decide to re-enter three times. Before you are starting the tournament, think about your re-entry strategy and about how it fits within your bankroll management plan. The good news is PLO tournaments tend to have small fields, which should lower the variance present in large tournament fields.

Because of rake and other factors, in 6-max PLO cash games you generally want to avoid open-limping. By contrast, in PLO tournaments limping can be part of a solid winning strategy.

At key stages in the tournament and especially with low and medium stack sizes, limping helps you minimize the variance and still increase your profit. By implementing a limping strategy, you will be able to see more flops against weaker opponents with weak ranges, which can be very profitable. You also avoid exposing yourself to a big stack's three-bet, which would commit a much bigger percentage of your stack.

The most common situation is to limp in from late position, and you should still be selective of the hands you choose to limp. Playing in multi-way pots, you tend to favor bigger cards with higher suits. You don't want to start limping hands that will end up being losers at showdown.

Be willing to fight for these small pots if your opponents put up weak resistance. The idea is to win small pots and build your way into a bigger stack that can more easily afford to try and steal the blinds.

4. Don't try to make your opponent fold a big hand

Often in PLO tournaments, you will be facing opponents who mainly play no-limit Texas hold'em. The most common leak for these lesser-experienced PLO players is that they overvalue the strength of their hand, both preflop and postflop.

There are many players in PLO events who still overvalue disconnected high pocket pairs like K-K and Q-Q, given they're always such strong hands in NLHE.

Similarly, they will overvalue overpairs, top pairs, and two pairs postflop. In PLO cash games it can be fine to bluff and try and make someone fold a flush on a paired board. In tournaments, most players are not going to make big folds, especially when starting out with medium stacks. Bluffing without fold equity can end up being a very costly leak.

This brings us to the final tip. As mentioned before, your opponents' most likely weakness is going to be overvaluing hands. If they are calling your bets with too wide of a range or too often, there's no reason for you to slow play hands as often as you might in cash games.

When you have a big hand and you are facing an opponent who doesn't like to fold, just bet!

The correct exploit is to bet your strong value hands and maximize their profitability. When you have a big hand and you are facing an opponent who doesn't like to fold, just bet!

That said, keep your eyes out for anyone that's paying attention to how you are playing. Be ready to mix in some bluffs and slow plays specifically against observant opponents to keep them guessing.

Pot-limit Omaha tournaments can be a great addition to your schedule, whether you are playing PLO cash games or NLHE tournaments. They are soft, have smaller fields, and require strategy shifts most players aren't aware of. Investing even a moderate amount of effort to learning proper PLO tournament strategy can pay off substantially at this stage of the game.

I hope these five tips make you think about the difference between the two games and make you feel more comfortable when jumping into a PLO event. After a few rounds you'll see for yourself that, these games are extremely soft!

If you want to learn more about pot-limit Omaha, check out the PLO Mastermind over at JNandezPoker.com. The PLO Tournament Strategy course within the membership has over 25 video lessons and around 15 hours of content. Videos include theory and practice, including JNandez reviewing his hands during deep runs and final tables.

Mahjong Exchange: the Only Online Mahjong Game that Matters

Top Free Slots to Play with No Download and No Registration

Play all the Best Online Video Poker Variants in 2019!

Three Things You Shouldn’t Do in Pot-Limit Omaha