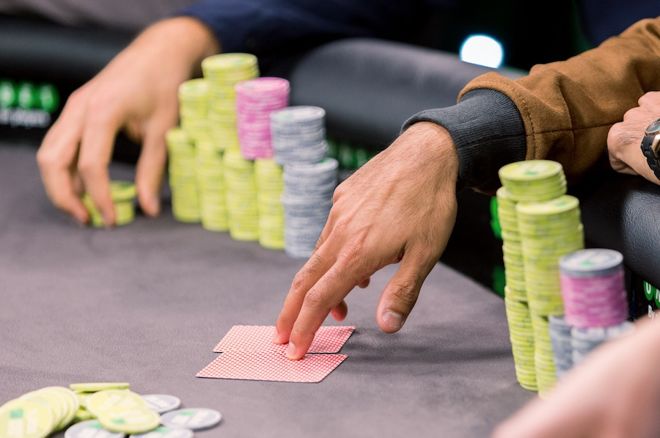 Of all the factors that dictate what you can and can't do during a poker tournament, it's the size of your chip stack — and the stack sizes of others — that reign supreme. In a no-limit hold'em multi-table tournament, you can go from hero to zero with the turn of a card, so understanding stack sizes and how they affect the dynamics of a poker hand is a crucial aspect of poker learning.

In this article we're going to focus primarily on preflop play in multi-table tournaments where we can break down our awareness of stacks into three broad areas:

We'll take each of these one at a time, but first one caveat. If everyone at the table has 40 big blinds or more — such as during the early stages of most tournaments — then basically all options are open to all players. In that case,you need to work on picking up your opponents' tendencies, pay attention to bet sizing, and exercise your general poker smarts more than worrying too much about stack sizes.

It doesn't take long in tournaments, though, for stacks to begin to vary — and to take on increasing importance.

The Importance of Stack Sizes: Those Acting Before You

When it comes to understanding what you can and can't do with a certain stack size and getting reads via stack sizes, we're basically looking to draw from our own knowledge of poker strategy while looking out for anything unusual or out of the ordinary. This unusual event could be based on your knowledge of the player in question or just general population tendencies of poker players. For instance, a player with a short stack who limps from under the gun throws up a red flag immediately.

Both stack size and position need to be considered when assessing the action of players acting ahead you before the flop. A player with a 25-big blind stack who opens with a raise of 2.5 times the big blind from under the gun presents a very different proposition from a player with the same stack making the same raise from the button.

We can narrow ranges this way because the risk-reward ratio gets heavily skewed towards risk for a player to be "messing around," say, by raising from UTG with

with a stack of 18 BBs, because if he is forced to fold to a reraise the player has lost a significant percentage of his stack. Meanwhile a player with 35 big blinds who makes the same raise from early position can have a much wider range of holdings (including those same suited connectors and even weaker hands).

The concept of leverage is also something to think about in this situation. In simple terms, you use leverage whenever you can risk a small percentage of your stack to make an opponent risk all of his.

Say you're facing a raise from a player who started the hand with 20 big blinds. The player opens with a min-raise (that is, 2x the BB), and it folds to you. You have a healthy stack — 40 big blinds or more. Here a reasonable-sized reraise involves you risking a small portion of your stack while putting your opponent in a spot where he must commit all of his stack to continue in the hand, since calling means committing simply too much of his stack. Your reraise puts the player in an all-in-or-fold spot.

As such you don't have to stick to premium holdings to make this "move." An opponent with a stack of 20-25 BBs is the sweet spot for this sort of play. If the player has less you can be priced into a call should he shove, and if he has more the chance of the player calling your reraise goes up.

The Importance of Stack Sizes: Your Own Stack Size

When we consider our own stack size we can break down our discussion between (1) what we can do when first into the pot, and (2) what our options are should we be facing a raise or even a raise and a three-bet.

When first into a pot, the shallower our stack and earlier our position the stronger our holding should be. Opening

from the button with 30 big blinds is a no-brainer, even if both players in the blinds are sitting with less than 10 BBs. Being dealt the same hand with the same stack while under the gun, it's probably a fold.

The trickiest decisions when electing if we should enter the pot with a raise usually come when our stack is 15-20 big blinds. For starters, with that stack size we need to decide if we're going to open-raise or just shove. It's still okay to raise and then fold from this stack, but it's not ideal.

The decision on how to play the pot hinges on many factors that include (but are not limited to) our position, our pot odds, the stacks of those still to act behind us, the size of the running ante (if there is an ante), the tendencies of the players behind us (do they like to call a lot or not), and lastly our actual hand strength.

Against good opponents, altering our raise size based on hand strength alone isn't a good idea. However, in low stakes tournaments you can get away with it to some extent, as players typically aren't quite as attentive to such patterns.

When we're facing a raise all of the same factors that we considered above still exist, but we also have more information to help us make a decision. Where has the raise come from? How many blinds does the raiser have? Is the raiser loose, tight, or do we not know? Answers to these questions affect our decision whether to call, fold, or raise.

The Importance of Stack Sizes: Those Still to Act

Having a good idea of the stack sizes of the player(s) still to act after you is a crucial skill in multi-table tournaments. That means when we raise from first position, we are considering everyone at the table and then fewer opponents as our position improves.

One particular situation which crops up often is when we're facing a raise and we have the chips to call and a decent hand, but one that can't stand a three-bet from someone behind us. At this point when taking note of the stacks of players behind us, if there are numerous stacks set up for a "squeeze" then consider folding as the best play.

I'd consider a squeeze stack size to be 15-25 big blinds. Players can't really squeeze with less, as an opponent will likely be priced in to call, and if they have more then it's possible a standard three-bet would be the better play.

Likewise, in the above scenario, it can often pay to just call with a premium hand with the knowledge that a player may try to squeeze all in behind you. If you have a premium holding, you don't much care if it's a genuine squeeze or a bluff squeeze as you're calling regardless. It's a play to consider especially in turbo tournaments when much of the tournament is played with short-to-medium stacks.

When first into the pot, as we discussed earlier, we should be aware of how many players can leverage their stacks against us and put us in an awkward spot when we have between 20-35 big blinds. When raising from mid-to-late position, we need to be aware of how many shoving stacks are behind us and the tendencies of the players in the blinds. When entering the pot from early position, we also need to take into consideration that we'll likely be playing the hand from out of position after the flop.

The stack sizes of your opponents at the table are constantly changing, so you always need to be paying attention, particularly when a big pot sends chips to those players to the left of you. Make it a habit as each hand begins to survey the stacks all around the table, helping you make better decisions when deciding when and how to enter pots.

Ready to take a seat at the table? Put these multi-table tournament tips into practice at 888poker.