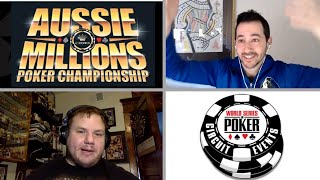 Born November 15, 1982, Dutchman Jorryt van Hoof hails from the city of Eindhoven where he studied Industrial Engineering for a year before he decided to become part owner in a game store called GameForce. In 2003, van Hoof discovered poker he prefers pot-limit Omaha cash games. In 2014, van Hoof found himself as chip leader of the World Series of Poker November Nine, but he ultimately finished in third place for $3,806,402.

From a very young age, van Hoof has had entrepreneurial interests. At the age of 12, he played Magic The Gathering, and it was his involvement in that game, along with the fact that many of his customers frequently played the game, that brought him to poker.

Van Hoof's early poker knowledge stems from reading books, after which he further evolved his game by playing and discussing strategies with his friends. The Dutchman notched his first ever live tournament result at the Aviation Club in Paris in the Spring of 2005. Just a few months later, he played his first event at the World Series of Poker and earned his first cash in a $2,000 no-limit hold'em event where he finished 66th for $3,450.

In the fall of 2006, Van Hoof had a huge opportunity to become a poker celebrity in the Netherlands when he led the Master Classics of Poker Main Event in Amsterdam for three straight days; however, he was unable to seal the deal ended up finishing in seventh place for $67,790, far short of the $893,233 first-place prize.

While tournament poker is not Van Hoof's bread and butter, he managed to cash three more times at WSOP times in 2007 and 2008, though after that he took a five year sabbatical from Las Vegas. At the 2013 Utrecht Series of Poker, in the Netherlands van Hoof won the €1,000 event for €32,205, and coincidentally last year's November Niner Michiel Brummelhuis finished seventh in that same event.

Against all odds, a Dutchman made the November Nine in back-to-back years, and as fate would have it Brummelhuis and van Hoof went way back as both were a part of the early poker movement in the Netherlands. Despite tournament results dictating a poker player's reputation, van Hoof has been a fan favorite in the Dutch poker community for many years. Back in the day, van Hoof won the first ever $5,000 winner-take-all tournament for $100,000 and made a famous call with eight-high against Dylan Linde in the Sunday Million which had the online railbirds going crazy.

After having lived in Dublin for a year to fully focus on being a consummate professional, van Hoof moved to Malta, a country he lived in for many years. Van Hoof now lives back in the Netherlands where he spends most of his time playing PLO online under the moniker “TheCleaner11.” He also makes training videos for Dutch poker site NederPoker and stresses that players should focus on the mental and physical aspect of being a successful player.

Interestingly enough, van Hoof owes his online screen name to Justin “ZeeJustin” Bonomo. After playing against Bonomo under the screenname “Jorrytvh,” Bonomo was asked if he knew who he had played against and responded, "I don't know, but he cleaned me out.” The rest is history.

Then, on Day 7, everything went van Hoof’s way as he navigated his way to the top of the counts. Van Hoof began the final table with 38,375,000, which marked the first time since 2008 that the chip leader enters play with less than 20% of the chips in play. Van Hoof used his big stack to make it three-handed play, but it was there he was done in by Felix Stephensen and Martin Jacobson.