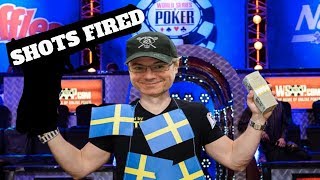 Jamie Gold struck it big in poker when he won over 12 million dollars for his first place finish in the 2006 WSOP Main Event. Not only did Gold outlast the largest field in WSOP history, but he was, and still is, the largest money winner in any single tournament.

Before coming into poker fame, Gold was a talent agent from Malibu, California. After graduating from the University of New York at Albany with a bachelor’s degree, Gold went on to study entertainment law at UCLA. Using hard-earned experience and his education, Gold was able to build a good reputation throughout the entertainment industry. With this, he was able to become the youngest franchised agent at only 21 years old and soon went on to start his own talent agency, JMG Management.

The 2006 WSOP Main Event began with Jamie Gold serving as one of Team Bodog’s celebrity players along with Mekhi Phifer and Dean Cain. In what was one of the most dominating performances in the tournament’s history, Gold gobbled up chip after chip from his opponents en route to victory with professional poker player and mentor Johnny Chan providing support from the rail. Not even world-renowned professional player Allen Cunningham could stop him at the final table.

As if striking gold to the tune of over 12 million dollars and a deal with Bodog wasn’t enough buzz for Jamie, he was soon involved in a legal dispute with a fellow poker player by the name of Crispin Leyser. Leyser claimed that Gold owed him half of his winnings from the event and due to pending legal action, Harrah’s froze Gold’s winnings until the issue was settled. In due time though, things were settled between the two. When questioned about the ordeal, Gold claims it was all a misunderstanding and that things were easily resolved when the two sat down together.

After parting ways with Bodog at the beginning of 2007, Gold ventured to become the head of an entertainment company called Buzznation. That wasn’t the end of poker for Gold though. He’s still a widely recognized face on the poker scene as he still participates in various tournaments around the world. Gold was also a cast member on a season of High Stakes Poker where he battled it out in a cash gamer format with some of the best players in the world.