If you have an Android* or iOS** powered device, you can enjoy partypoker's products while on the move. Cash games, fastforward poker and sit & go tournaments are all available from partypoker mobile apps.

Overall, here’s what we liked the most about partypoker's mobile app:

* In order to install the app on an Android device, you must first enable non-Market apps by going to "Settings" > "Security" and checking the tick box "Unknown sources".
** The iOS app is currently available only in Austria, Azerbaijan, Canada, Czech Republic, Germany, Ireland, Luxembourg, Mexico, Netherlands, Norway, Portugal, Russia, Slovakia, Sweden an the UK. 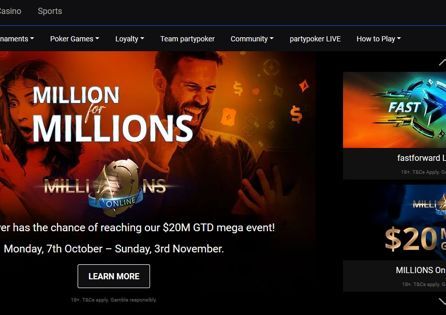 Since 2001, partypoker has consistently been one of the largest and trusted online poker sites available for real money play. Partypoker is committed to attracting casual and recreational players to its site, which makes for a softer player pool.

Download partypoker via PokerNews, make your first-ever real money deposit, and enjoy up to $30 worth of tickets.

Deposit $10 to receive $10 in tickets. tickets over the course of a week:

Deposit $20 to receive $30 worth of tickets. tickets over the course of a week:

40 percent cash back is awarded for every 200 points once 2,000 points have been earned in a week

partypoker unveiled the Diamond Club Elite VIP scheme in February 2019 that awards 60% cashback, a package to the partypoker LIVE Caribbean Poker Party and entry into the $10,300 MILLIONS Online for everyone who manages to rake $200,000 in a calendar year.

Partypoker first launched in 2001, and at one time it was the leader in online poker. Partypoker is still one of the largest online poker sites in the world and its software has been downloaded more than 30 million times.

In March 2011, PartyGaming and sports betting giant bwin merged to create bwin.party Digital Entertainment, the world’s largest publicly listed gaming company. In September 2013, partypoker launched a new "social" poker software that incorporates a number of features designed to attract new and casual players. These include player achievements and the ability to easily see what your partypoker friends have recently been up to.

Since February 2016, partypoker's parent company, bwin.party entertainment, has been owned by GVC Holdings who purchased the company for more than $1 billion.

Hold'em and Omaha cash games running from $0.01/$0.02 and increasing up to $200/$400 for both Hold'em and Omahaand are played on six-handed or heads-up tabls. All cash games are anonymous until you are seated at the tables, a measure put in place by partypoker to prevent higher skilled players from targetting weaker players.

partypoker's take on fast-fold poker is called fastforward poker and is available in no limit Hold'em and pot-limit Omaha form, and with stakes ranging from $0.05/$0.10 up to $2/$5.

When playing fastforward - once you fold your hole cards, you are instantly whisked away to a new table with new opponents and a fresh set of hole cards. If you don't like your new cards, you can throw them away and keep folding until you find a hand that you feel comfortable with.

partypoker has put a lot of effort into revamping its tournament schedule, there is now $10 million guaranteed every week.

Three major online festivals run at various points throughout the year. POWERFEST is partypoker's flagship festival and sees hundreds of tournaments with buy-ins of $1.10 to $25,500 over the course of a couple of weeks. The Monster Series is partypoker' low-to-mid stakes festival that usually has buy-ins of $0.44 to $33 yet still features some large guaranteed prize pools. Rounding off the trio of series is the KO Series which focuses on progressive knockout tournaments.

partypoker also has "jackpot sit and go tournaments" called Sit & Go Hero. These fast-paced games give you the chance to win potentially huge prizes of up to $1.02 million in a matter of minutes and for a relatively small buy-in.

partypoker also has "jackpot sit and go tournaments" called Sit & Go Hero. These fast-paced games give you the chance to win potentially huge prizes of up to $1.02 million in a matter of minutes and for a relatively small buy-in.

Should you experience a problem while playing at partypoker, you can contact the room's support team via email, a free phone number, or through the live chat facility. The poker room also offers an extensive FAQ guide.