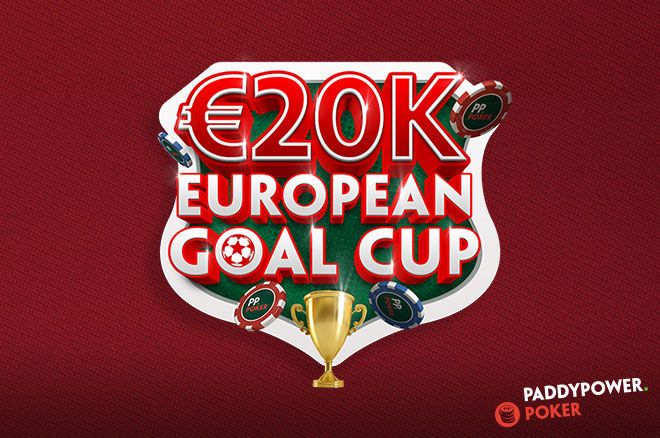 There are few things in life as satisfying as scoring or watching a goal being scored in football. The back of the net bulging, the player wheeling off in celebration, and the crowd going wild. Goals really a sight to behold.

You want to see lots of goals scored under normal circumstances, but a superb promotion from Paddy Power Poker means you benefit from juicier guaranteed prize pools every time a goal is scored in selected UEFA Europa League and Champions League fixtures.

The €20K European Goal Cup is a novel promotion that rewards Paddy Power Poker players from the United Kingdom and Ireland each time a goal is scored in specific Europa League and Champions League games. These special tournaments aren’t available anywhere else on the iPoker Network, you can only find them online at Paddy Power Poker.

The concept is simple yet potentially lucrative. Paddy Power Poker has created eight exclusive tournaments, four with Europa League and four with Champions League, in their title that you can enter and play. Each has a guarantee attached to its prize pool and this guarantee increases each time a team scores in one of the pre-selected football matches.

For example, there was a €500 GTD Europa League L16 tournament scheduled to run at 7:00 p.m. BST that costs €500 to buy into. Paddy Power Poker increased the guarantee by €100 every time a goal was scored in the Manchester United versus LASK match. That game finished 2-1 to Manchester United, so the tournament now has €800 guaranteed for a €5 buy-in.

There’s also €10 buy-in Champions League L16 tournament at 8:00 p.m. BST on August 9. Its guarantee is currently €1,000 but this will increase by €200 for every goal scored in the Manchester City versus Real Madrid fixture on August 7! There’s no limit to the added money, so let’s hope for a 5-4 thriller!

As an added incentive to play these special tournaments, the top three finishers in the Last 16, Quarter Final and Semi Final tournaments receive a free entry into the next round’s tournaments. It’s a superb promotion that you seriously need to get involved with.

Download Paddy Power via PokerNews, create your free account, and create your poker nickname. Play in £20 worth of multi-table tournaments, sit & go tournaments, or the exciting jackpot Sit & Go games known as Twisters and Paddy Power Poker will reward you with a £50 bonus over the next five days.

Log into your account each day while the welcome bonus is active and you’ll get your hands on the following package over the next five days: