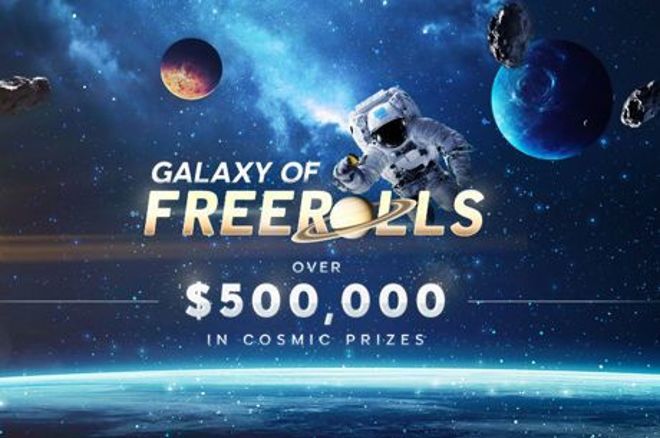 Did you know that 888poker has been giving away truckloads of money in the Galaxy of Freerolls absolutely for free?

We aren't just talking about pocket change as the Galaxy of Freerolls will give away over $500,000 in cash and there is still time for you to get involved!

These are still running but the biggest and best freeroll is yet to come in the two-day $100,000 Super Saturn Freeroll just around the corner.

The first step to earning tickets to any of the freerolls is having an account at 888poker and have made at least one real-money deposit.

If you don't already have one, we have great news as not only is there still time to get tickets to some of the Galaxy of Freeroll tournaments but you will also be rewarded with a robust welcome package.

Download 888poker through PokerNews to grab an $88 bonus (£20 in the United Kingdom) without making a deposit.

Your first deposit will then be matched in the form of a bonus of up to $888. This is more than double most players get by downloading 888poker directly from their website.

888poker presents you with three easy-to-complete missions every day. Choose one and complete it and you will be awarded two free tickets to the $2,000 Venus Freeroll.

If you complete two missions or more in a week, you will be invited to play for big money in the $10,000 Neptune Freeroll with the final one taking place on Sunday, June 7 at 8:25 p.m. GMT.

Unfortunately, it is a bit more difficult to qualify for the $100,000 Neptune Freeroll as you will need to complete at least 14 missions during the entire promotional period ending on June 7.

However, if you have already completed a handful of missions in previous days, now is your time to put your pedal to the metal and make sure you complete enough missions on the days to come to get involved in what promises to be a very lucrative freeroll.

There are freerolls to remember and those that are worth forgetting.

The $100,000 Super Neptune Saturn is in an entirely different class.

Think for a moment. How often do freerolls give away $100,000 in cold, hard cash if every at all?

Also, how many freerolls give you the look and feel of a huge tournament with a multiday structure like this one?

If you earn a ticket to the freeroll, you will have your choice between many opening flights on June 4-6. You can qualify to the second and final day taking place on Sunday, June 7 at 6:25 p.m. GMT by making it through 13 blind levels or to 20 percent of the field remaining, whichever comes first.

The tournament provides a great structure with 5,000 in chips and blinds increasing every eight minutes. That might sound fast, but most freerolls these days have much quicker structures with 2-3 minute blind levels.

The $100,000 Super Saturn Freeroll is one that can't be missed. Head to 888poker to win big in this promotion and many more great offerings to come.