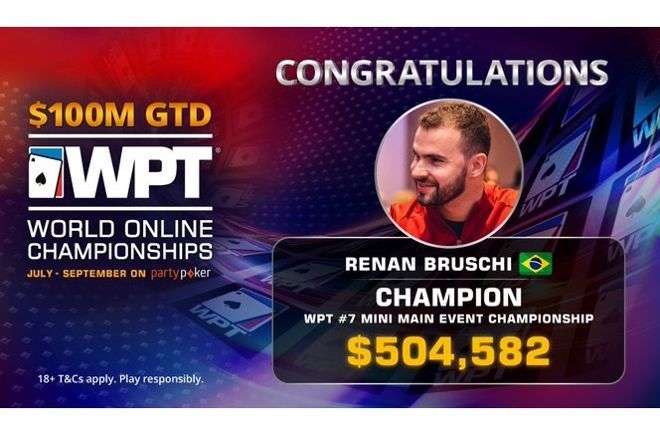 The WPT World Online Championships Mini Main Event showcased just how easy it is to turn a small investment into a huge payday, as five of the nine final tablists either satellited into the $1,050 event or won their tickets in the WPT Ticket Drop promotion.

Eventually, it was Renan Carlos Bruschi who won $504,583 after topping the 4,600 player field to become the latest champion of the WPT WOC. The top four players agreed to a deal, with the biggest payout going to Artur Balodis who eventually finished third.

For all the latest news, results, interviews and more, head to the WPT WOC Live Reporting Hub!

Heading into the final table, Liviu-Rodrig Bartha led the final nine players. Short-stacked Tobias Koerper was eliminated within the first hour, but will be proud of his result. He won his $1,050 seat as part of the WPT Ticket Drop promotion, after winning an $11 buy-in Terminator, and turned that into a $45,600 payday!

Ravil Tlimisov also won his seat from the WPT Ticket Drop promotion after he won a $22 Big Bounty Hunter tournament for his seat. He finished eighth for $55,425.

Bruschi eliminated Latvia's Romans Voitovs and Janis Loze to close the gap to Bartha, but it was Arturs Balodis who moved in front, despite Bartha eliminating Freek Scholten in fifth.

Play was fairly deep-stacked, and the remaining four players quickly agreed to a deal which left $50,000 to play for. Balodis took home the biggest amount with the remaining players all locking up large six-figure sums, with three of them locking up huge ROI as a result of satelliting in.

The next Championship event is the WPT World Online Championships Main Event Day 1b. The event comes with a $10,000,000 guarantee. Day 1a attracted 521 entries with Day 1b taking place this Sunday at 19:05.

Win Your Way Into The WPTWOC Main Event From Only $2.20