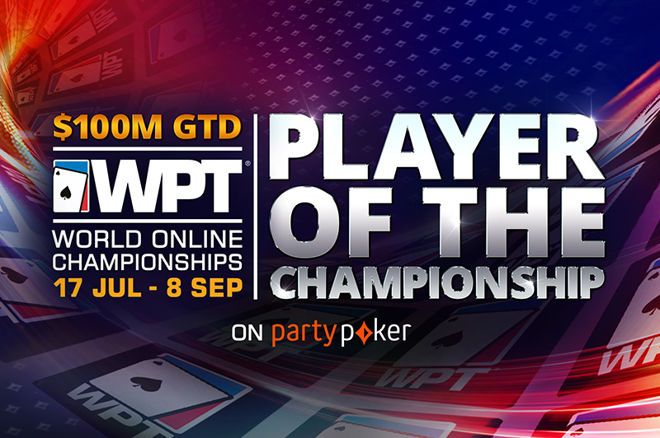 The WPT World Online Championships (WPTWOC) are taking place at partypoker with the massive series now into its eighth week. A pair of leaderboards, which have $100,000 worth of prizes, are in play for the best performing players of the series.

WPTWOC Player of the Championship Standings

Scott Margereson leads the Player of the Championship leaderboard, albeit by a mere 12.42 points. That’s the narrowest of gaps considering there are still some huge events still to come, including the $1,050 Mini Main Event and the $10 million guaranteed $10,300 buy-in WPTWOC Main Event.

Margereson’s narrow lead is over Team partypoker’s Kristen Bicknell. Bicknell has already won a brace of side events and is one to watch in the series’ biggest events. The Canadian finds herself only 18.44 points ahead of teammate Roberto Romanello.

Romanello, who recently completed poker’s Triple Crown of titles, is within touching distance of the leaderboard’s top prize. Whoever finishes in first place gets their hands on a cool $50,000.

Should Bicknell, Romanello, or any other member of team partypoker finish in a prize-awarding position, their prize becomes available to win in the form of a special freeroll tournament bearing their name. If the leaderboards ended today, that would be $15,000 worth of freerolls between Bicknell and the Welsh Wizard.

Thomas Boivin, Artur Martirosian, Parker Talbot, Dimitar Danchev, and Shyngis Satubayev are all most certainly still in contention for a prize. Don’t write anyone off at this stage.

Less than 4.5 points separate first and second place in the exciting Rising Star leaderboard. Andreas Ojeda holds the slightest of advantages right now but anything can change from one day to the next.

Ojeda has accumulated 216.50 points with Brazilian Luiz Constantino occupying second place with 212.14 points. Constantino was nowhere to be seen in the race to become the WPTWOC Rising Star until he won the $109 Micro Main Event for a shade under $150,000 earlier this week. It goes to show that a big result makes all the difference on this leaderboard.

Tony Dunst blown away by the WPTWOC

There are only 47.12 points between Ojeda in first and James Rann in 10th so the Rising Star leaderboard is far from a forgone conclusion. This means the likes of WPT500 champion Fabio Sperling, who’s currently in ninth-place, has every chance of walking away with the leaderboard’s $10,000 top prize.

There are plenty of chances to earn points throughout this week, including in the $5 million guaranteed $1,050 Mini Main Event. Day 1A took place last week and saw 2,510-players buy-in and generate half of the guaranteed prize pool amount.

Day 1B starts at 8:05 p.m. CEST on September 6 with Day 2 starting at the same time on September 7. Play on Day 2 continues for 16 levels with the surviving players returning to the action 24-hours later to crown the champion.

There are satellites galore for this $5 million guaranteed Mini Main Event, plus the chance to win a ticket for only $10 via WPTWOC edition SPINS. Furthermore, there are more than a dozen tournaments on the partypoker schedule that have $1,050 tickets added to the prize pool as part of the site’s value-packed ticket drop promotion.