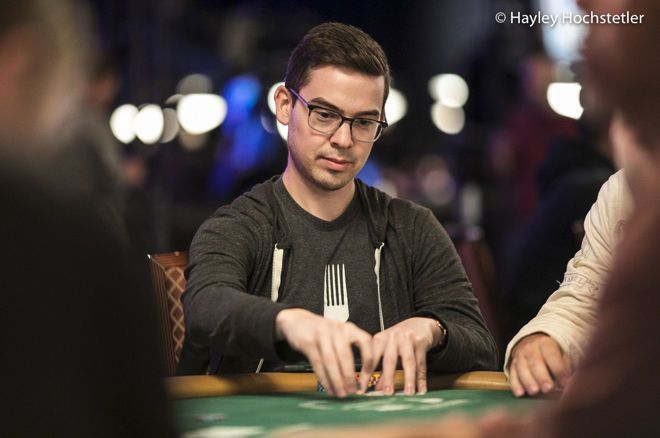 After a month of intense high-stakes heads-up poker action, the Run It Once Legends Showdown has come to an end with Kevin "krab42" Rabichow triumphant over the favored Pauli "Fiilismies" Ayras in the finals.

and Ayras potted the flop and turn before shoving for more than the pot on the river. With his second pair and blockers to the draws, Rabichow called and won a €20K pot.

Rabichow was up about €5K when they played a big one 150 blinds deep. Rabichow three-bet with

flop. Rabichow continued small for €850 and Ayras called, bringing a

river. With just over pot to play, he checked and Ayras went for the shove, seeing the bad news when Rabichow snap-called to go up more than two buy-ins.

then flop a pair and a flush draw. What could have been a mighty interesting pot 150 big blinds deep was cut from the broadcast due to technical difficulties, but it became clear when the cast returned that Rabichow had prevailed as he was up close to €40K.

The biggest hand down the stretch didn't go to showdown and had no hole card cam active. Rabichow opened on the button and called a three-bet, then Ayras bet €1,000 into €2,000 on the

turn that Ayras barreled for €3,000. The river was the

. Finally, with €8K in there, he checked the river holding

. Rabichow opted to shove for €6K with

, having missed his flush, and Ayras let him have it immediately.

Still, it was Ayras getting the better of the early action, and he cut his deficit to just over a buy-in when he three-bet the

. An action flop of

arrived for Ayras and he bet €2,400. Rabichow called, bringing a

. Versus the river shove, he did find a fold, but most of his profit had been eaten up.

However, Rabichow worked his way back to +€20K and then a cooler developed where each player backdoored a flush, with Rabichow's king-queen trumping the ten-nine of Ayras. As they were 150 blinds deep, it was nearly a €30K pot for Rabichow to push him back up almost €40K.

Rabichow peaked up about €13K for the day and €55K overall, but Ayras took over down the stretch and won about €30K over the final couple of hundred hands to win about €10K and cut the deficit to €33.5K.

About 100 hands in, they were about even for the day when a cooler developed in Ayras' favor. He put the four-bet in with pocket queens and Rabichow crammed with pocket tens to send a stack over and make things sweaty.

Rabichow watched as Ayras continued to win the bigger pots they played, and his lead was soon down under a buy-in, meaning any one pot could shift the leader. Rabichow dwindled down to only being up about €2,500 before working back to €13K up when a huge pot went down, with 300 hands to go until the finish.

arrived on the river. Ayras jammed for €7,750 effective, and Rabichow went for the hero-call. Suddenly, he was now the one trailing.

Ayras continued to build his profit and got up to +€20K. With 250 hands to go, he was actually up enough money to fold to the win at €27K, but given that he'd be giving up almost exactly what he'd be winning, he opted to keep playing.

. A hold would all but end it, but the turn was an

and Rabichow filled up on the river to get within striking distance.

With 150 hands left, Rabichow moved into the lead. He had been down €4K when he turned a gutshot with

. The graphics of the stream glitched, but Rabichow got a turn bet paid then he bet €4,500 into €3,000. Ayras looked him up on an unknown river card with

and was suddenly stuck a few thousand.

The most classic of hold'em confrontations would be the deciding hand. Rabichow three-bet with

and called a four-bet by Ayras, who held

and Ayras bet €1,500. Rabichow called and the turn was the

. Each player checked and the river was the

. Rabichow shoved for €6,400 effective and Ayras tried heroing to no avail.

Here's the breakdown of the total money won or lost in the event:

While the Legends Showdown has wrapped up on Run It Once Poker, the Galfond Challenge is set to resume with Phil taking on Chip Leader Coaching's Chance Kornuth. Follow the action with daily recaps right here on PokerNews.