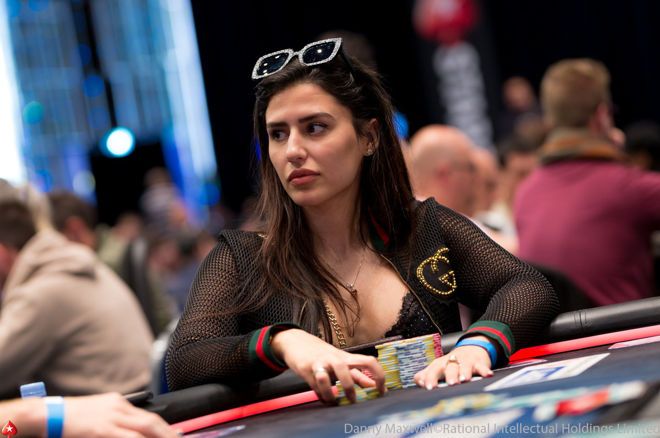 Event #82: $1,050 Beat the Pros (Bounty) has come to an end after over 13 hours of play after a field of 2,024 players had been whittled down to an eventual champion. When the dust had settled, it was Melika "Melirazavii" Razavi of Iran who won her first career bracelet and the grand prize of $239,180, quadrupling the previous biggest score of her career.

While Razavi may be best known from her roots in pageantry, sporting over half a million followers on Instagram, she's been active in the poker world for years, dedicated to crafting success in her passion. Last year, she made a splash in the EPT Monte Carlo Main Event where she ultimately finished in 17th place for €36,620.

A passionate poker player, magician, and motivational speaker, she's achieved the crowning moment of her poker career by becoming a member of the exclusive WSOP gold bracelet club.

PokerNews featured Razavi during her deep run in Monte Carlo, where she encouraged other women to pursue their passions even if discouraged by others. With gambling - including poker - and beauty pageants off-limits in her home country, Razavi's path through life has been one full of challenges.

READ MORE: Read the interview PokerNews had with Razavi at the EPT in Monte Carlo

"I've been through a lot and that made me a really strong person. To me, believing and never doubting and never allowing anyone to tell you that you can or you cannot - that works for me," she told PokerNews last year.

"I'm stepping out to show them and to tell them that no matter where you're from, no matter what you have, if you put your mind into something, nothing and no one can stop you."

Check out full live reporting of this event!

Road to the Bracelet

The Iranian poker player zoomed onto the tournament radar when the final few tables were playing out as she became chip leader with three tables left and would remain toward the top of the counts from then on. With five players remaining she would take a hammerlock grip on the table, by holding as many as 60% of the chips, while her opponents were all short-stacked at that point.

However, it would not be an entirely smooth ride to the bracelet as she was the victim of a set-under-set cooler against eventual third-place finisher Andre "ubermensch1" Difelice, to lose the chip lead with five remaining. But solid play would see her climb back up to the top of the counts and would then hold a 2:1 chip advantage to begin heads up play once Difelice was eliminated in third place.

Heads up would turn out to be quite the battle as Razavi received stiff resistance from WSOP-veteran Dylan “mezcal” Linde who did not let the chip deficit phase him as he quickly won multiple hands in a row to make the chip stacks nearly even.

Razavi would again take a big chip lead when she flopped two pair against the pocket queens of Linde, which knocked Linde down to only about one fifth of the chips. But Linde was not done yet as he battled back again, and even took the chip lead after some well-timed raises.

Razavi would re-assert her command after a while and eventually whittle down Linde’s stack to a measly ten big blinds, where she then trapped him with a full house on the final hand to confirm the victory for herself.

Last month, Razavi appeared on the Jeff Gross podcast to talk about her passion for poker and magic together with "The Magician" Antonio Esfandiari. Check out that video below.