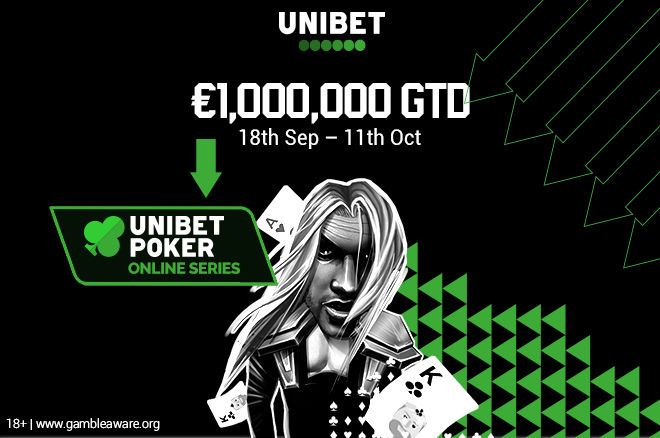 If you're looking for a smaller buy-in festival over the next month, then Unibet Poker have got just the thing. With buy-ins starting at just €0.25, the Unibet Online Series comes with €1,000,000 guaranteed across 132 events.

The month-long festival starts on 18th September and runs until 14th October, culminating in the 2020 Unibet Open Online with four separate events included as part of the overall schedule.

There are four different buy-in levels, allowing players from all bankroll to join in the fun:

Included as part of the Unibet Online Series, the Unibet Open Online has four separate events which culminates in the €250,000 GTD Main Event with a €1,100 buy-in.

Players will earn points for the Overall Leaderboard by competing in Low, Mid or High tournaments, with Nano events excluded. Players will receive one points for every tournament they play, with additional points available for players finishing in the top 17% of a particular tournament.

The winner of the Overall Leaderboard will walk away with €2,200!

As well as the Overall Leaderboard, there are separate leaderboards for the separate buy-in categories. Again, players will receive one point for every tournament they enter, with extra points depending on where they finish inside the top 17%. The High Leaderboard is for tournaments with buy-ins from €100-€1,100/

The Mid Leaderboard is for tournaments with buy-ins from €25-€50.

The Low Leaderboard is for tournaments with buy-ins from €5-€10.

The Nano Leaderboard is for tournaments with buy-ins from €0.25-€1. In order to qualify for the Nano Leaderboard, players must have played at least 31 of all 44 nano events. With a total prize pool of €1,500, all qualified players in the Nano leaderboard will win the same amount with the prize pool being shared equally.

The amount of points you receive is determined by our fair for all formula that considers the buy-in, the number of players and your position. Everything is calculated and added automatically as per below.

One leaderboard point for every Low or High tournament played. NB: Nano events excluded.
If you finish in the top 17% you get additional points according to this formula
1,5*SQRT(n)/SQRT(k)*b

Example – Finishing in 1st place in a UOS Low MTT with 200 total players.

Another addition to the Unibet Online Series is the Bubble Burster Tournament which is open only to players who have bubbled a tournament during the Series. Held on Wednesday 14th October at 19:00 (CET) the UOS Bubble Burster Showdown is a single-entry tournament.

Unibet have also announced that several "Mystery Tournaments" will form part of the Unibet Online Series. Players just have to keep an eye on the lobby to see when these tournaments appear. They’re all Freerolls, with a total of €2,000 to be won!

Get Started at Unibet Poker With This Welcome Package

Signing up to Unibet Poker via PokerNews entitles you to a welcome bonus worth up to £500. This bonus is released into your account when you reach certain rake milestones, which means you’re constantly receiving more money as you play.

Once you rake €2 at the cash game tables or any tournament (or a combination of both), Unibet Poker places a €1 cash reward in your account. Rake €10 and an additional €4 cash is all yours. Once you’ve raked a total of €800, you’ll have received €200 in your account, the equivalent of 25% cashback, which is a pretty sweet deal.

In addition to the welcome bonus, new players are invited to four weekly €500 freeroll tournaments, which run on Sundays, receive an €8 cash game ticket when you make a deposit and four €4 Unibet Open tickets.

Learn How to Stop Making Simple Mistakes in PKOs