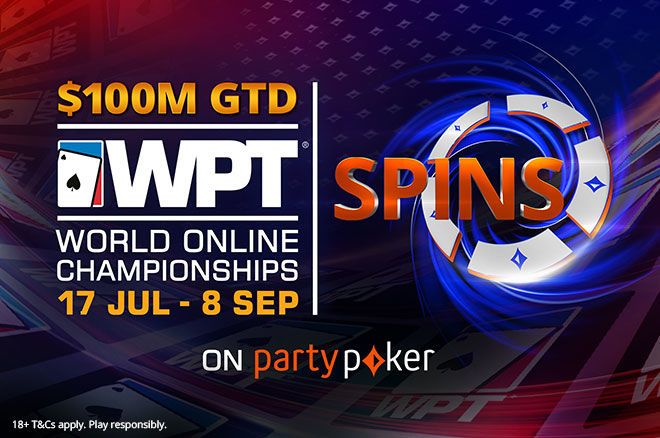 The WPT World Online Championships (WPTWOC) are in full swing over at partypoker and some of the prizes awarded to the events’ champions have been nothing short of huge. The festival’s biggest tournaments are known as Championship Events and these take place weekly with buy-ins of $33, $320, and $3,200.

You could be playing in these Championship Events, the $10,300 Main Event, or any of the side events for only a $10 investments and a few minutes of your time. Why? Because WPTWOC edition SPINS are running at partypoker right now.

SPINS are three-handed jackpot sit & go tournaments where the prize pool is randomly determined before the first cards are in the air. WPTWOC SPINS have two buy-ins, $10 and $100, and they pay out cash for their lowest prize pool multiplier, but also WPTWOC tickets ranging from $33 up to $10,300.

These tournaments are over in a matter of minutes thanks to everyone sitting down with 500-chips (25 big blinds) and playing to a three-minute clock. The action is fast and furious, but it means you can either rack up dozens of games per hour and improve your chances of winning one of the bigger tickets.

It’s usual for SPINS and similar games to pay out the lowest prize pool multiplier more frequently, but WPTWOC SPINS are different. The most common multiplier is the 3.3x level which awards the SPINS winner with a $33 WPTWOC ticket.

This buy-in level makes it possible to win a $10,300 WPTWOC ticket that you can use to enter the $10 million guaranteed Main Event!

The $100 buy-in WPTWOC SPINS games also award their second-tier multiplier more frequently than the bottom. This is a $320 ticket.

These games could be your best route to a $320 ticket because it’ll only cost you $100 to get one. Even if you hit the lowest prize pool multiplier you’re going to win $200 so you’re almost 2/3 of the way to the $320 ticket anyway!

Again, you can win a ticket worth $10,300 which sees you rubbing shoulders with the game’s elite towards the end of the festival.

You can get your hands £40 worth of WPT tickets when you make your first deposit at partypoker. Download partypoker, make a deposit of £10 or more and receive two $10 WPT SPINS tickets and one $33 WPT tournament ticket. It's as simple as that.