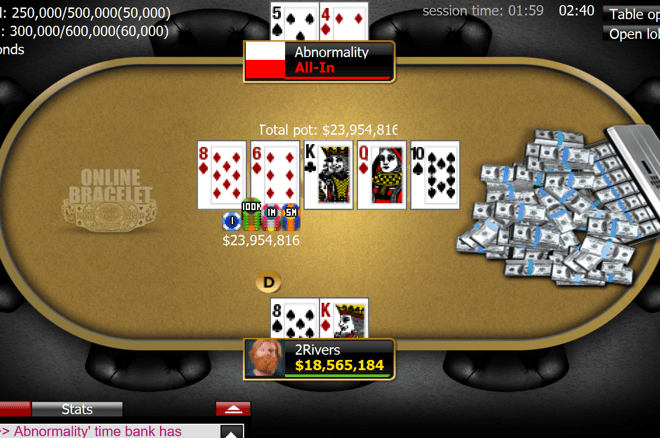 The final table kicked off with a flurry of eliminations all in a 15-minute span. First, it was Kevin “SpecialK333” Calenzo exiting in ninth after getting it in on the flop with an open-ended straight draw and missing against the ace-high of Tamero, and then Michael “merlot” Bailey followed him out the door losing with ace-nine all in preflop against the ace-ten of Andrew “WATCHGUY42” Lichtenberger.

Soon after, Lichtenberger notched another knockout when Arian “4632647” Stolt jammed with ten-nine suited and “Lucky Chewy” held with ace-nine. From there, Greg “Bubblealot” Wish lost a race with pocket fives against Norman “abnormality” Michalek’s king-eight after the latter flopped two pair.

Edan “goatplaya” Sucov then lost jack-ten to the ace-eight of Tamero to exit in fifth place, while Brian "foxxx" Kirchhoff failed to get lucky with ace-six against Michalek’s ace-queen all in preflop. Lichtenberger the three-bet jammed with ace-five only to get called by Michalek, who held with pocket eights.

That allowed Michalek to take 30.5 million into heads-up play against Tamero, who began with 12 million. However, Tamero was able to pick off two bluffs to take the chip lead and then closed things out shortly thereafter when Michalek attempted a failed river bluff.

That wraps up our live updates from the 2020 WSOP bracelet events on WSOP.com, but there’s still more than a month of WSOP action on GGPoker. PokerNews will be offering coverage of each event, which you can follow here.