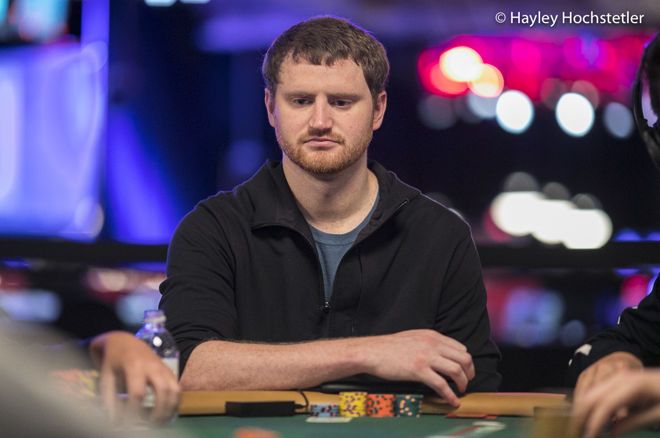 David Peters has done it again! The tournament legend from Toledo, OH, ranked 7th on The Hendon Mob's all-time money list with $33,737,539 in lifetime winnings, captured his second gold bracelet in Event #54: $10,000 Heads Up No Limit Hold'em Championship for $360,480, Peters followed up on his 2016 bracelet win in a $1,500 No Limit Hold'em event to double his tally of the coveted prize.

After being behind for the majority of the final showdown against Michael Addamo, Peters wrestled himself back on top before winning nine hands in a row to drop Addamo to the short stack. Addamo doubled back once but the second all-in brought Peters the victory, denying the Aussie's bid at a third WSOP title and leaving Addamo to settle for $223,488 as the runner-up.

Alyssa MacDonald and Chi Zhang lost their respective semifinals against Peters and Addamo and received $124,160 each.

As arguably one of the toughest events on the schedule, the $10K heads up was stacked top to bottom with the cap of 128 players easily reached days in advance. The event kicked off last Sunday with players like Daniel Negreanu, Belarmino de Souza, Mike Leah, and Bertrand "ElkY" Grospellier all making the money.

The elite field promised big matches right off the bat and Peters didn't find himself in the easy part of the bracket by drawing Johan Guilbert and Sami Kelopuro as his first two opponents. Peters worked his way through them, following it up by dispatching Scott Woods and Sergi Reixach to grind his way to victory against Stefan Burakov in a multi-hour affair to claim his spot among the final four.

After the six-day delay, Peters took on the surprise of the tournament — Alyssa MacDonald — in the semis. MacDonald, an online pro and streamer from Canada, took a slight lead early on in the heads-up before Peters worked himself to a 2-to-1 lead.

Their clash ended after 1.5 hours in a hand where MacDonald flopped top set in a three-bet pot, while Peters flopped middle pair and a gutshot. He picked up a flush draw on the turn as well, but it would be the gutshot coming in on the river to end the Canadian's cinderella run.

While Peters versus MacDonald was mostly a small-ball affair, Michael Addamo and Chi Zhang came out swinging in their semifinal. With both players favoring very aggressive styles, a lengthy battle wasn't expected upfront. It would take one big three-bet pot where Zhang flopped top pair and Addamo trips that would end their match within half an hour.

Addamo, who made headlines earlier this week after being on the wrong end of the biggest recorded pot in NLHE online cash game history, had the luxury of resting up for the final while Peters was still working to eliminate MacDonald. Directly after both semis were concluded, cards went in the air for the final.

The final showdown between Peters and Addamo took about two hours before a winner was crowned. Addamo quickly took the lead and held on to it for the vast majority of the first eight levels. The Aussie claimed a lot of non-showdown pots to stay ahead, frequently accompanied by a river overbet.

Just one all-in situation played out between the pair in the earlier stages but it was a good one: a Casino Royale-like cooler with Addamo holding the ace-high flush and Peters the straight flush. The setup brought Peters back up to nearly equal stacks again.

Once in shallower waters, it was Peters claiming the majority of pots including a nine-hand winning streak to drop Addamo to the short stack. Addamo doubled up once, but after Peters dropped him below the ten big blind mark again, Addamo made a second stand with

. Peters snapped him off with the ace-king and flopped an ace, turned a second ace, and rivered a king to seal his victory in style.

That's it for PokerNews coverage of the $10k Heads Up Championship, but there's plenty more WSOP action to follow. Check out the GGPoker WSOP tournament hub for upcoming bracelet events.