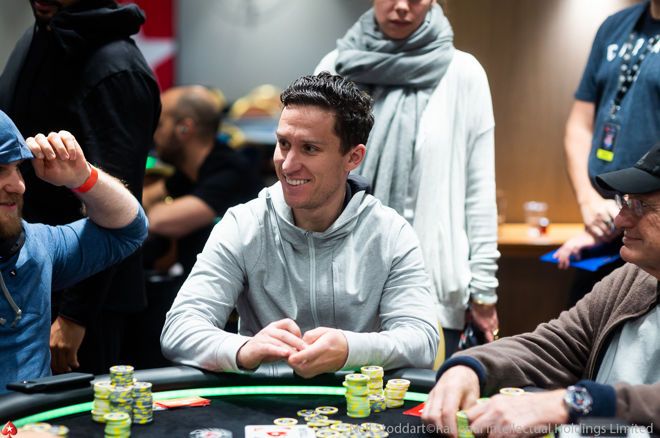 Daniel Dvoress has won Event #48: $1,500 MILLIONAIRE MAKER on GGPoker for a massive score of $1,489,289! The Canadian high roller, one of the most accomplished players without WSOP gold with over $15M in winnings on his Hendon Mob, defeated a 6,299-player field to capture his maiden bracelet.

Caio "Ez4ENCE" De Almeida of Brazil finished runner-up, making himself a millionaire in the process as well with $1,072,428. Russia's Anatoly "Mr_Deer" Filatov completed the podium and received $772,251 for finishing third.

For some of the elite, crossing their name off the infamous "best player without a bracelet" short list might mean getting a monkey off their back. However, it wasn't the case for Dvoress — a fixture in high rollers across the globe — as he hasn't put himself into that spot to begin with, instead shying away from the limelight in Sin City.

In an extensive feature with PokerNews leading up to the delayed MILLIONAIRE MAKER final table — the event was paused for six days to accommodate for live streaming on Saturday — Dvoress touched on never having traveled to Las Vegas to compete in the WSOP.

Check out the PokerNews feature on Daniel Dvoress

"I'm likely missing out on some EV, especially with the Main Event, but have been enjoying taking previous summers off and focusing on things outside poker," he said, also citing an unfavourable tax treaty between the US and Canada as a reason. "Between other live events and the usually packed online schedule right before the summer with SCOOP and everything surrounding it, I'm usually pretty burned out by the summer and welcome the time to focus on health, fitness, and doing things outdoors."

But in 2020, the world is different. With COVID-19 turning the tournament calendar on its head, the online WSOP on GGPoker suddenly provided a unique opportunity for Dvoress to capture a prize that wasn't on his radar to begin with. And while he generally stays away from short-term poker goals where variance rears its head all too often, the fact was he had a rare chance to add to an already splendid resumé.

"While a bracelet wouldn't be the difference between success and failure, it would be a way to leave my mark in the WSOP forever," Dvoress said. Leave a mark he did, as his victory was nothing short of dominant. He maintained the chip lead start to finish and eliminated his final five opponents single-handedly — and in record fashion — to end the tournament in style.

As a textbook example of how ICM affects final tables, the players competed into very shallow waters right off the bat with five out of nine stacks starting off below the 10 big blind mark. With each jump being worth at least $40,000, laddering up was on many a player's mind, which resulted in plays like Ronny Kaiser folding his blinds to leave himself half a big blind. Dvoress, meanwhile, put his chip lead to work, relentlessly flinging his chips around to put the pressure on the other finalists.

The blinds even moved up after the first hand, making it one of the shallowest final tables in recent memory. One of the shorties had to budge soon and it would be Aneris "TaiwanNumba1" Adomkevicius to break first, followed by Tomasz "SushiJanushi" Cybulski before Ronny Kaiser's short stack adventure would end. All three players busted out holding three or fewer big blinds.

While not being involved in the eliminations up to that point, Dvoress was active in every other hand, picking up tons of blinds and antes with his ubiquitous shoves to never see his chip lead come under threat at any stage. He'd go on to eliminate the remaining players starting with Neville "NevSlater" Endo Costa, who also had just three big blinds in his final hand.

Dvoress Finishes It in Style

If there was a time at the final table where Dvoress' lead was slightly challenged, it would be after the hand where Caio "Ez4ENCE" De Almeida doubled through the chip leader. Not to be denied, Dvoress won the next four hands uncontested to distance himself from De Almeida and the others again.

After the break, the Canadian separated himself even further when Caridad would fall with queen-jack against his eights in the biggest pot of the tournament up until that point. Within mere minutes, the tournament was over as Dvoress also eliminated Nugent and Filatov in short order, before making quick work of De Almeida in two hands.

In the final hand, the Brazilian's crumbs went in with king-eight. Dvoress looked him up with the king-queen and held up to make good on his opportunity. Due to the massive prize pool of nearly $9 million, De Almeida also became a poker millionaire for his second-place finish.

In addition to his first-place prize, Dvoress also seemingly won $100,000 from GGPoker's Daniel Negreanu in a bracelet bet, pending Negreanu doesn't win a bracelet of his own this series, but Negreanu tweeted shortly after that after checking there apparently was no bet between the two in place at all.

Congrats! Looks like I need to get to work # https://t.co/wqrwWoTlJ6

While the MILLIONAIRE MAKER may be over, the $10k Heads-up is in full swing. Follow along with PokerNews live coverage of this event right here.