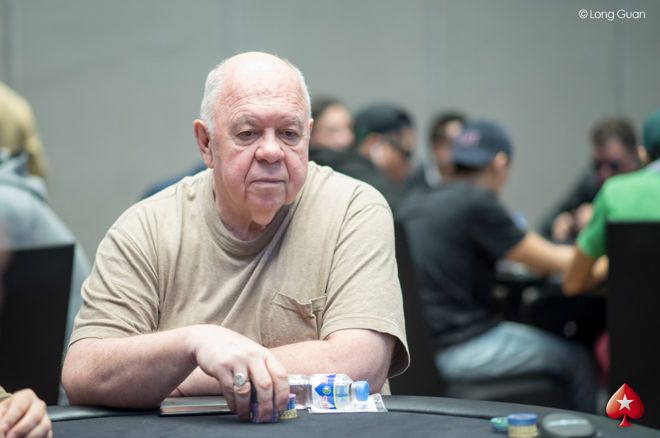 Last month, PokerNews published a two-part feature detailing the oral history of ChipTic. A program that promised to revolutionize the way poker was presented to fans, ChipTic got off to an auspicious start before ultimately meeting a massively disappointing end well short of the expectations of nearly everyone involved.

Despite the well-documented fate of ChipTic, lingering questions remained unanswered for years. Everyone saw the failure, but why had it failed? How had everything gone so wrong, sinking a project with such promise?

One man who can answer those questions reached out to PokerNews in the aftermath of the oral histories: company founder John Beveridge. For years, a non-disclosure agreement forced his lips fully zipped. Finally able to open up, he expounded on ChipTic's rise and fall over an hour-long call.

An Idea and a Fateful Choice

Beveridge was just a recreational poker player participating in the WSOP when he had an experience common to many little-known players there.

He played a hand against Allen Kessler, wherein he said he busted "Chainsaw" with a flush over a straight. As he stacked his chips, reporters rushed over and asked him what happened.

"I tell them and they publish that Kessler was busted by a player in Seat 5," Beveridge says. "No mention of me, and I thought there has to be a way to allow the average recreational players to be recognized and to allow people who follow them at home to see some of the action instead of it being all about the known players."

As owner of an electronic solutions company called PageMail, the Canadian was uniquely suited to turn this idea into reality. While he isn't a programmer, he had the tools to get the job done thanks to his industry work and connections. Plus, he had the dough.

"Back in the day we were making huge money," he says.

It took three years to develop the software, which Beveridge named ChipTic — a reference to the way a stack rises and falls similar to a stock on a ticker.

Software in hand, it was time to find a tablet to run the program.

"The BlackBerry tablet offered an easy cradle charger, durability and a nice, bright screen," Beveridge says. "You can drop this sucker flat on its face and it's not gonna make any difference. It's tough. The screen was very, very tough and the touch screen was one of the best in the day."

It also likely didn't hurt that BlackBerry shipped them 900 tablets for free, according to Dan Carpenter, whom Beveridge had hired to head the operation.

However, that fateful decision would have devastating consequences down the line, for reasons nobody could have foreseen at the time.

The trial in Iowa revealed no issues with the tablets, but another cog had to be added to the machine with the move to the Rio in order to cover the vastness of the rooms with an internet signal.

ChipTic partnered with Xirrus, which Beveridge says produced the fastest and most powerful WiFi access points at the time. Amazon, Brasilia and Pavilion rooms at Rio were each equipped with a single 10-radio access point high in the scaffolding.

The "very sophisticated and extremely powerful" units, which measure about two feet across, have their 10 radios arrayed in a circle, each pointing in a different direction of the room and broadcasting a signal. The BlackBerrys would pick up the signal aimed at their sections. At the surface level, everything looked good — the tablets showed five bars of signal.

Beneath the hood, though, corruption spread, unbeknownst to the ChipTic team.

When the connection issues surfaced, a closed-door meeting occurred with reps from ChipTic, Xirrus, BlackBerry and the Rio. Everyone pored over the logs until the Xirrus engineer raised a question that remains rooted in Beveridge's memory.

"In this multi-radio landscape, how does the tablet choose what radio to use?"

The BlackBerry rep responded that the tablet chose the strongest signal, ignored the ones it couldn't sense and blacklisted the weak signals. The Xirrus rep asked how long the blacklist lasted. "Permanently," came the response.

"Everybody fell out of their chair," Beveridge says. "As the tablets were recharged and moved about the room, individual radios on the access points were steadily being blacklisted until the majority of tablets saw no valid radio. This wonderful tablet we were using was killing us.

"I think back on that moment and my back pocket hurts so much. We had half a million dollars floating down the drain with three lines of code."

Life as a Poker "Pariah"

According to Beveridge, that programming was far outside industry standard at the time. A "simple" fix came down more than a year later, but it was far too late to save ChipTic. They were sunk by a freak programming misstep.

And thanks to a non-disclosure agreement, Beveridge couldn't even tell anyone what happened. Not his own staff nor their new partners at WSOP, who were less than pleased that the promised revolution had fallen apart more quickly than a typical new development on the North side of the strip.

"I listened to them roast my ass and I had to take it," Beveridge says.

Beveridge became, in his own words, "a pariah." He had once lived a high-rolling poker life, chumming it up with poker celebrities in home games and flying to Macau to play high-stakes poker. Those days were over.

"I did my best to pay everyones salaries out of my own pocket and retired to lick my wounds," he says.

He considered giving it another go a couple of years later, but he found himself short on both capital and respect in the community. Now 72, he calls Fallsview his home casino but mostly plays small-stakes cash online. He has also been spotted playing events in the Philippines, where he spends some of his time as well.

Would ChipTic still be around if, as Charlie Ciresi guessed, they had used new iPads instead of BlackBerrys? Nobody can say for sure, but ultimately, the years have made Beveridge comfortable shouldering the blame.

"I take full responsibility for the colossal failure," he says. "The buck stopped with me."

Daniel Dvoress Is Man To Catch in WSOP 2020 Online Leaderboard