Be Part of 888poker's Biggest Festival Ever 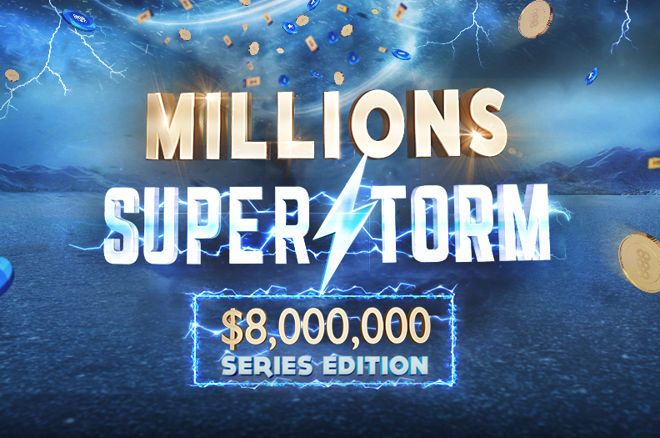 The biggest poker festival in the nearly two-decade history of 888poker is about to take place thanks to the return of the Superstorm.

The Superstorm is really something super with 480 amazing events boasting a total of $8 million in guaranteed prizes from Sept. 10 to Oct. 11.

Any player regardless of the size of their bankroll can take part in the Superstorm including playing in the $1 million guaranteed $320 Superstorm Main Event.

Read on to learn to more about the Superstorm and how you can potentially play in the Main Event for free.

Be part of the Superstorm at 888poker.

The Superstorm is something never seen before at 888poker with a plethora of tournaments every day. The schedule boasts a fixed schedule every day outside of two rotating events at 6 p.m. GMT that are the biggest events of the day.

The fixed portion of the schedule is something you can be part of without even playing satellites with buy-ins ranging from $5.50 to $109 and guarantees as high as $109. Of course, you can qualify in for even cheaper into any event of your choice.

Here is a look at the fixed portion of the schedule.

As we already mentioned, there are two bigger tournaments running daily at 6 p.m. GMT on a rotating basis based on the day of the week. There is one bigger event every day with a bigger buy-in than most of the daily schedule. You can try qualifying for that while also playing the mini-version of this event as well.

Here is a look at some of the bigger 6 p.m. GMT events running daily throughout the festival.

Play in the $1 Million Gtd. Main Event for FREE

The highlight of the festival is the two-day $1 million guaranteed $320 Superstorm Main Event.

Opening flights have already begun, so there is no point in waiting to get started on qualifying for Day 2 on Oct. 11 at 8 p.m. GMT.

The tournament boasts a great structure with players begin each opening flight with 10,000 in chips and blinds increasing slowly at every 20 minutes.

The opening flights won't be marathons despite the great structure with each flight ending the sooner of 12 blind levels completed or 14 percent of the field remaining.

For many of you, $320 might prove to be too much. After all, it is a good chunk of change.

Rest assured there are plenty of $30 satellites that can qualify you straight into the Main Event and you can feed into these satellites starting at just $0.01.

But, you don't even need to spend a penny as you can potentially play absolutely for free and here's how.

Just log into 888poker every day where if you have made at least one real-money deposit you will get a chance to spin the Daily Spinner. It's absolutely free to spin and you can win a freeroll satellite ticket that awards seats to the Main Event along with many other great prizes.

Even if you don't manage to win a freeroll ticket in a spin you can still grab one by completing one of the following easy-to-complete daily challenges.

With so many opportunities to play for free or if you prefer for a penny, what do you have to lose to try?

Qualify to the Superstorm Main Event for FREE!

The Superstorm Main Event is your chance to hit it big. The best part is that you can get into the event for free, but, of course, you will need an account to do so.

If you don't already have one, we have even better news for you as our readers are treated to a welcome package far greater than most new players receive thanks to the special relationship we enjoy with 888poker.

Simply download 888poker through PokerNews and you will be awarded an $88 bonus (£20 in the UK) without making a deposit.

Once you are ready to make your first deposit, it will be matched in the form of a bonus up to $888, or more than twice as much advertised on the site.