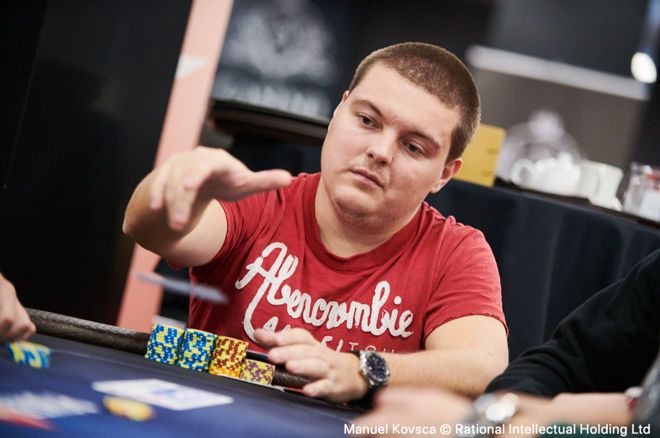 Andrey Kotelnikov has been crowned the latest winner of the World Poker Tour World Online Championships on partypoker after victory in Event #6: Mix-Max Championship for $488,508.

He defeated Stuart Guite heads-up, who battled back from being the short stack at the start of the final table to take home $366,605 after an entertaining battle between the final two players.

Kotelnikov defeated a field of 989 players and wins entry into the $15,000 WPT Tournament of Champions, along with a Hublot Classic Fusion Titanium watch and his name on the Mike Sexton WPT Champions Cup.

The seven-handed final table was notable for several reasons, with the presence of WPT Champion Oleg Vasylchenko just one of them. Just two of the seven players had bought in directly, with every other player having qualified via satellite. Vasylchenko had in fact won two entries via satellite tournaments, and came in as the clear chip leader.

Stuart Guite was the start-of-day short stack, but doubled early through and pushed further ahead away from the danger zone during the early exchanges. That double came at the expense of Jerry Wong, who was subsequently eliminated when his ace-ten rang into Guite's queens.

A double for Joakim Andersson through Dimitar Danchev saw the Bulgarian bust shortly thereafter, with Maciej Gasior not far behind him. At this stage it was Andrey Kotelnikov in the lead, and he would extend it at the expense of Vayslchenko.

The start-of-day chip leader had tussled throughout the final table, but would eventually have to settle for fourth place. Kotelnikov was in full control with nearly double Guite's chip stack, with a long way back to Andersson in third.

Heads-up play was an entertaining affair with the chip lead swinging back and forth between the pair. Guite flopped the nut straight only for Kotelnikov to turn trips, which saw Guite move into the lead. However a double saw Kotelnikov back in front.

Kotelnikov opened up a similar lead to the one he had at the start of heads-up play, but Guite battled back valiantly. The final hand came when Guite flopped two pair, only for Kotelnikov to turn a straight. The money went in and the river bricked, crowning Kotelnikov the latest WPT Champion.

He walks away with include a $7,500 Hublot Classic Fusion Titanium watch; $15,000 entry into the prestigious WPT Tournament of Champions, and his name added to the Mike Sexton WPT Champions Cup

The next Championship event on the WPT World Online Championships schedule is Event #7: $3,200 Heads-Up Championship. This event comes with a $500,000 guarantee. The tournament is capped at 256 entries with no late registration.