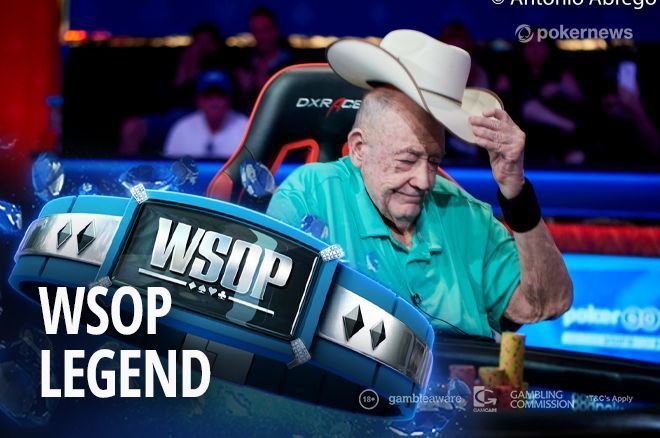 At the beginning of the 2005 WSOP, Doyle Brunson remained the co-king of the all-time bracelet count, tied along with Johnny Chan at nine. However, as the series drew toward its close in late June, that was no longer the case — Chan had overtaken him by winning No. 10 to stand atop the mountain alone.

Brunson was already phasing out his tournament play, having cashed precisely zero times that summer and just three times in the previous two combined, although one had resulted in a bracelet victory.

When it came time for Event #31: $5,000 No-Limit Hold'em 6-Handed, Brunson dusted off his tournament chops and made a run. Through a field of 301, he made the final table, where he sat second in chips behind fellow multiple-bracelet winner Layne Flack, with Scotty Nguyen also occupying a seat.

While no live reporting record exists, the final table was televised, and an archived edition of the coverage can be found on PokerGO.

Early in the final table, after a couple of knockouts, Brunson picked up a huge pot when he turned trip eights against the top two pair flopped by Flack, enabling him to wrest the lead away and put himself atop the counts.

After Flack worked back ahead of Brunson, they played a huge preflop all-in pot where Brunson's kings held up against ace-queen as he flopped a set. Though Flack wouldn't be busted, he'd still go out fourth. Brunson got lucky with two outs to finish Flack off a bit later and secured himself position as the clear favorite.

When Nguyen busted on a flip against Minh Ly, it was Ly looking for his first bracelet against Brunson, whose first had come nearly 30 years prior.

The match provided an entertaining ending as Brunson attempted to run Ly over by shoving with ten-three offsuit, which he said he mistook for ten-deuce, a hand he'd made famous by using to win the WSOP Main Event twice. Ly called him with king-queen but couldn't hold as the cards continued to fall Brunson's way. A flopped pair of threes was all he needed.

Brunson continued to be an occasional presence at the Rio in the years that followed, and the 2005 win wouldn't be his last final table appearance.

He got there four more times, the last coming in 2018 in what he proclaimed would be his final WSOP event. There, in the $10,000 2-7 Single Draw Championship, he bowed out in sixth for his 36th WSOP cash.

None, though, bore gold-coloured fruit, leaving Brunson locked in at 10 bracelets unless he changes his mind one more time and a fairy tale run follows.

While Brunson appears likely to end his career there, fellow WSOP legend Phil Hellmuth would catch and surpass him, flooding his trophy case with 15 bracelets.