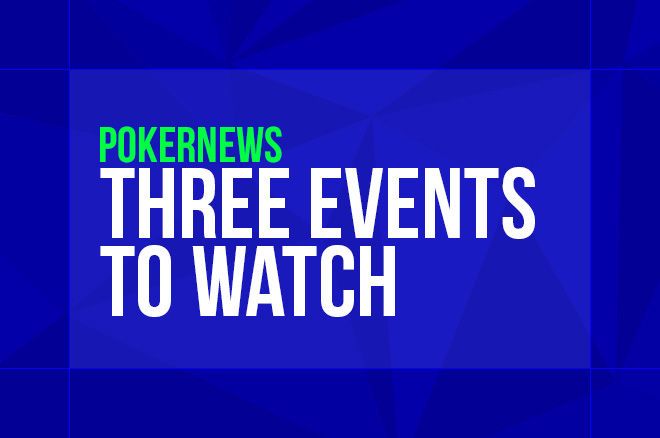 This weekend is huge if you’re an online poker tournament player with huge events taking place on almost every site. There’s so much value floating around that the title of this article could be Two Dozen Events to Watch but, alas, we’re going to touch on just a trio of must-play tournaments.

The PokerStars Stadium Series has seen some massive prizes awarded but those are set to be blown out of the water when the trio of Grand Finals shuffle up and deal on August 2.

Head to the PokerStars lobby and click the Stadium Series tab to find the remaining scheduled events. The Grand Finals are towards the bottom of the extensive list.

There’s a $55 buy-in Stadium Series Freezeout Grand Final with a cool $1 million guaranteed. You can jump into the $530 buy-in Medium edition and play for a share of a guaranteed $2 million, but the biggest is a $5,200 buy-in version with a gargantuan $5 million guaranteed.

The PokerNews Live Reporting team is on hand to bring you exclusive coverage of the $530 and $5,200 buy-in Stadium Series Freezeout Grand Finals so don’t forget to tune in and rail your favourite player to glory.

The WPT World Online Championships have focussed on Omaha tournaments for the past couple of weekend but not it’s time for the No-Limit Hold’em events to get involved at partypoker.

Three 8-Max Championship events get underway on August 1 and see $4.3 million guaranteed to be won between them. Each of this trio of must-play tournaments features two starting flights, a Day 2 and a final day.

Satellites and Mega Sats are running around the clock, giving you the chance to turn a small investment into the chance of becoming a WPT champion. Win the $3,200 buy-in event and you become part of the exclusive Champions Club plus receive a $15,000 entry to the next Tournament of Champions complete with travel and accommodation expenses.

888poker is running its popular Sunday Sale again this weekend meaning a handful of its biggest tournament are available to enter for half their usual prize. This makes the $100,000 Sunday Sale Mega Deep exceptional value because it only costs $55 to enter instead of the usual $109.

The $100,000 Sunday Mega Deep has a habit of overlaying even with its $109 full price so everything points towards 888poker having to make up a shortfall in the guarantee, which is great news for you as a player.

If playing in this tournament for only $55 isn’t good enough for you, what about winning your way into it from as little as $2.20? Check out the $100,000 Sunday Sale Mega Deep’s lobby for all the available satellites.

Play Poker, Level Up and Get Cash with Run It Once Legends Rewards