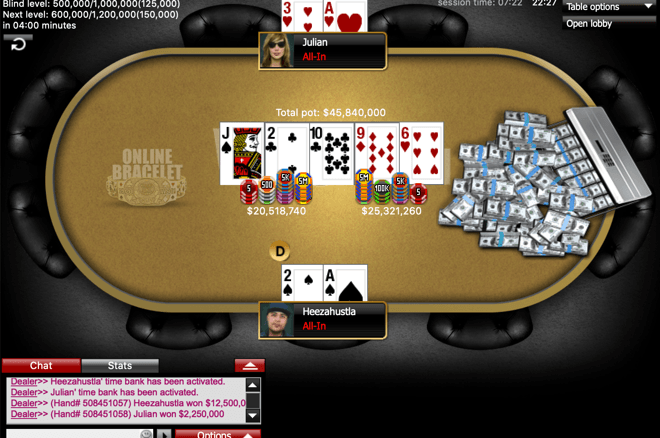 Little is known about Cheatham, other than he originally hails from Akron, Ohio but now resides in Las Vegas. He has $24,836 in live tournament earnings according to HendonMob, including a career-best $7,880 for winning a WSOP Daily Deepstack back in 2014. He also finished 106th in last year's WSOP Big 50 for $7,169.

Lev “Methinks” Milman, who was a chess champion in his younger days, began the final table with a big chip lead, nearly 2:1 over his next closest competitor. James “cbmezz99” Messeroll was the first final table casualty losing ace-six suited to the pocket jacks of Cheatham, and then Milman extended his lead by winning a 10-million chip pot when his pocket tens held against the ace-king of Phillip “AvonB” Rhodes.

Jeremy “http401” Govert exited in seventh place running ace-nine into Marc “Mojoesmarc” Bernal's suited Big Slick, and then Daniel “StayActive” Chan, who began the final table as the short stack, fell after losing with ace-six to the ace-king of Bernal.

Andrea “Andrewbull88” Buonocore hit the rail in fifth place after running pocket sixes into the kings of Bernal, who in turn bowed out in forth losing ten-nine suited to the ace-jack of Cheatham.

Cheatham then got it in on the flop with a flush draw against Milman’s trips aces, and a river heart allowed him to double big into the chip lead. Not long after, Milman ran ace-queen suited smack dab into Cheatham's two red aces to fall in third place.

Cheatham took 33.3 million into heads-up play against Julian “Julian” Parmann, who had 12.4 million. Parmann, a professional poker player for the past 14 years with $980,026 in live tournament earnings, put up a good fight, but with the blinds so big, he eventually shoved his last 10 big blinds with ace-trey against “Heezahustla’s” ace-deuce. A deuce appeared on the flop and Parmann had to settle for second place, good for $71,648.

The next tournament on the schedule – Event #17: $777 No-Limit Hold’em – will take place at 3 p.m. PDT on Thursday. The PokerNews Live Reporting Team will once again be reporting all the action, so be sure to tune in then to see who captures the next 2020 WSOP bracelet!