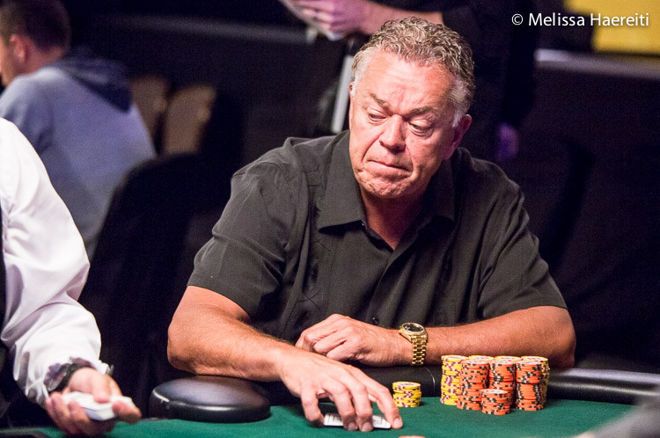 While he's got plenty of live experience, the tournament marked his first time ever playing online poker. He navigated a field of young, online crushers to show that even a live player can succeed online.

It was clearly a special moment for McMillen and his friends cheering him on.

Iowa’s Ron "MacDaddy15" McMillen had never played online poker before, but that didn’t stop him from winning tonigh… https://t.co/W7xPULMnYT

This was Ian "apokerjoker2" Steinman's second final table appearance this series but unfortunately, it was short-lived once again after he lost a flip holding ace-nine suited to McMillen's pair of ducks.

Chris "moodeez" Moody was the next to go after they three-bet jammed holding a suited jack-ten but was dominated by Ryan "Im.Sorry" Torgersen holding king-jack. Moody flopped a broadway draw but the board finished with running fives ending their tournament in fifth place.

The final table eliminations continued in a flurry after Ruth "crazeelf666" Ruffman got her remaining chips in the middle holding a made hand of tens but ran into the pocket queens of Torgersen ending her night in fourth place.

After Wade "WillowG23" Griffith bowed out in third place – the result of getting it in on the river holding top-pair only to see Torgersen table a flush – the heads-up match was set with Torgersen holding almost a 2:1 chip lead over McMillen.

Despite the disparity, it proved to be a back-and-forth affair until McMillen won a flip holding pocket tens against Torgersen's ace-queen. There wasn't much of a sweat as a ten appeared in the window giving McMillen a set to win the hand and from there he held a 19:1 chip advantage.

After the big race, it only took two short hands before Torgersen was eliminated in second place. They flopped top-pair holding king-four only to be flushed out on the turn by McMillen's ten-five of diamonds.

Immediately after the victory, McMillen and his friends headed to ARIA to celebrate with a bottle of Dom Pérignon.

The next tournament on the schedule – Event #9: $1,000 No-Limit Hold'em 6-Handed – will take place at 3 p.m. PDT on Thursday. The PokerNews Live Reporting Team will once again be reporting all the action, so be sure to tune in then to see who captures the next 2020 WSOP bracelet!