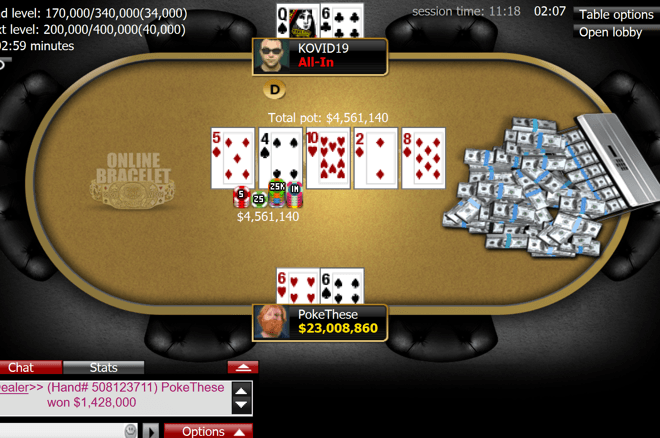 This article has been updated with the names of the winner and runner-up.

The field was chock full of big names, but after 11 hours of play it was the unknown “PokeThese” coming out on top to win a $168,586 top prize. Official results will be released later on Friday, at which time the champ’s name will be revealed.

After official results were released on Friday, it turned out to be Louis Lynch from Sinking Spring, PA to become the bracelet winner. Lynch has over $150,000 in lifetime winnings and eclipsed his previous biggest score of $54,494 my more than three times.

Lynch defeated Fremont, CA's Ryan "KOVID19" Ko heads-up, with the latter walking away with $104,242 for his efforts.

Also cashing the tournament in 101st place for $1,571.49 was Roland “prngls12” Israelashvili. While it wasn’t a big score, it was good enough to extend his all-time WSOP cashes lead to 226.

Another player to go deep was Daniel “DNegs” Negreanu, who was looking to capture his seventh gold bracelet. Unfortunately for “Kid Poker” and his legion of fans, he fell short busting in 18th place after running pocket nines smack dab into the tens of Matthew “Mendey” Mendez.

began the final table as the chip leader, but it was Sean "bahbababa" Prendiville who got down to business early. First, his king-nine bested the ace-jack of Matthew “Michmeister” Mich in an all-in preflop situation, and not long after his pocket queens held against Big Slick to bust Jon “jonnyg93” Gisler in seventh place.

Popular poker pro Jason “haderade” Somerville exited in sixth place after failing to win a race with ace-king against the pocket tens of “PokeThese,” and then Prendiville’s early momentum fizzled when he grew short and busted to Kevin “GoneBananas” Garosshen in fifth place.

Fischer was next to go getting unlucky when his king-ten failed to hold against “KOVID19’s” jack-ten, and not long after “PokeThese” opened up a big chip lead.

Garosshen wound up dwindling to an extreme short stack before bowing out in third place to “KOVID19,” who entered heads-up play down more than 3:1 in chips. Eventually “KOVID19” grew even shorter and got it in with queen-six only to see “PokerThese” wake up with pocket sixes and hold.

For residents of Nevada and New Jersey, the first step in getting set up to play on WSOP.com is to download the client. You can do so for both mobile (Android and iOS) and desktop (Windows 7 or higher and Mac OS X 10.6.8).

The next tournament on the schedule – Event #3: $400 NLH– will take place at 3 p.m. PDT on Friday. The PokerNews Live Reporting Team will once again be reporting all the action, so be sure to tune in then to see who captures the second bracelet of the 2020 WSOP!