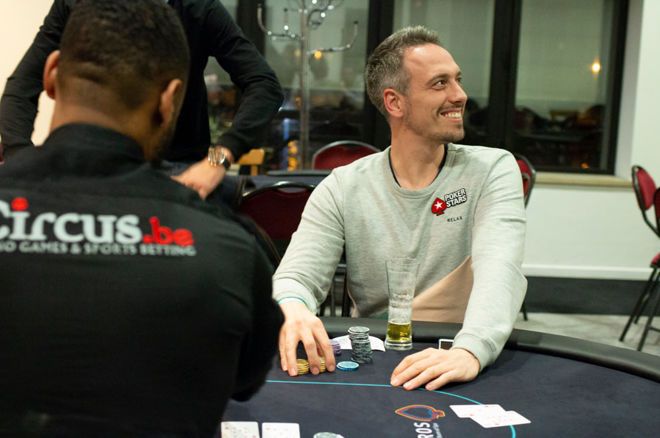 The exciting PokerStars Stadium Series continues to award massive prizes to players from all four corners of the world and Team PokerStars Pro Lex Veldhuis was one of those big winners.

Veldhuis came out on top in the Stadium Series Heat 16-H: $2,100 NLHE, a tournament with $500,000 guaranteed. Tournaments of this magnitude attract the superstars of poker and this event was no different with the entry list reading like a who’s who of the poker world.

Antoine “A.Saout” Saout, Joao “IneedMassari” Simao, Anatoly “NL_Profit” Filatov, and Dominik “Bounatirou” Nitsche were just a handful of the players who made it into the top 31 places where the prize pool was distributed.

Follow along with weekly PokerNews live coverage from the Stadium Series finals.

British grinder Andrew “stato_1” Hulme was the first finalist to bust and the first player to net a five-figure prize. Hulme collected $10,517. Russia’s “MiracleQ” followed Hulme to the cashier’s desk and got his hands on $13,869 before former EPT Malta champion Aliaksei “ale6ka” Boika crashed and burned in seventh-place for $18,288.

Pablo “pabritz” Brito Silva’s exit in sixth-place made the waters slightly less shark-infested. Veldhuis then tripled up when his aces held against the eights of Anton “Bomber&Granater” Wigg and the queens of Mike “SirWatts” Watson to put him in contention for the title.

The final hand saw Watson jam for a shade over 10 big blinds with ace-six and Veldhuis look him up with queen-nine of hearts. A queen landed on the turn to bust Watson and resign him to the $72,911, leaving Veldhuis to bank another $96,143 and doing so in front of his legion of Twitch followers.

Your guide to PokerStars PKO tournaments

The biggest prize of the week’s Stadium Series action went to the Brazilian star Alisson “heyalisson” Piekazewicz. He triumphed over 1,346 opponents in the $1,050 buy-in Freezeout Weekly Final.

Piekazewicz turned his $1,050 into a colossal $216,705 and the title of champion. The elite Brazilian defeated fellow countryman Luan “Pseudo Fruto” Felipe heads-up for the victory, the runner-up banked $185,376.

The tournament took place under the watchful eye of the PokerNews Live Reporting team. Read a blow-by-blow account of this massive tournament at our live reporting pages.

The $109 weekly final was incredible value because the 11,292-strong crowd enjoyed a $370,800 overlay. This money was added by PokerStars and shared among the top 1,367 finishers.

Everyone at the eight-handed final table banked at least $18,364 for navigating their way there. Belgium’s “Pimello” got their hands on this prize and they were joined on the rail first by “fozzzi” of the Ukraine then Shane “shaniac” Schleger. This was Schleger’s first online cash at PokerStars since August 2015! The man still has skills.

“thx4yours$” and “|Chomprias|0” busted in fifth and fourth-place, the latter scooping $71,123 for their $109 investment. Russia’s “Goallinfishara” saw their tournament end in a third-place finish worth $99,775.

Some of the other notable victories from the past week’s Stadium Series schedule included:

How To Get Involved in the Stadium Series

Stadium Series tournaments run every day and continue to do so up until August 2. Head to the PokerStars tournament lobby and buy in now if you have the bankroll for those events. If you don’t have the bankroll for the bigger events, or you simply want to save yourself some cash, there are plenty of other routes into the biggest Stadium Series games.

Spin & Go specialists can try their luck in the special edition Spin & Go’s. These come with buy-ins of $4 and $22 and award a mixture of cash and Stadium Series tournament tickets.

Don’t forget you can also complete the Stadium Series Trials via the Challenges Window of your PokerStars account. Start the challenge then play real money multi-table tournaments. You earn one leaderboard point for every $1 spent on tournament buy-ins. Finish in the top 25 of the leaderboard when the promotion ends on August 1 and a $5,200 Grand Final ticket is all yours. Finish in 26-125th place and bank a free Stadium Series Fast track Final ticket worth a cool $1,050.

Last, but certainly not least, is the Stadium Series Fast Track program. These are a series of sit & go and MTT tournaments where you can buy into at any stage, but only Stage 4 awards Grand Final tickets.

Keep an eye on your email inbox and in the PokerStars lobby for the many planned giveaways. PokerNews has learned PokerStars is giving away more than $2.5 million in Stadium Series tickets and by adding some serious value via other giveaways to make it possible for every player to have a shot at Stadium Series glory.