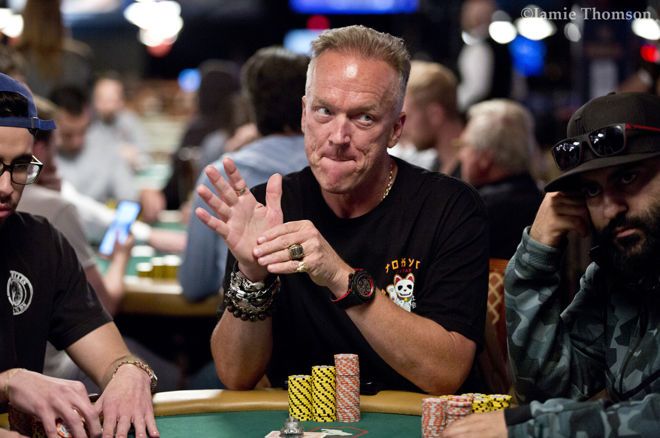 "Flyin' Lyons" as he's known has more than $1.5 million in lifetime live tournament earnings including a World Poker Tour (WPT) title when he won the 2016 WPT Legends of Poker for a career-high $615,346. That came just a couple of weeks after he won the 12th Annual Arizona State Poker Championship for $241,700. In 2018, he also won a WSOP Circuit gold ring at the Bicycle Casino.

Dave "DunningKrugr" Alfa started the final table midway in the pack but was first to fall as he ran his big slick into Lyons' pocket aces.

Julian "Julian" Parmann, who was runner-up in Event #16: $500 No-Limit Hold'em Turbo, came to the final table second last in chips and was the second body to drop after he ran his king-queen off into Barry "_MLB_" Wenger's ace-king to fall in eighth place.

Scott "BudLightLime" Hempel was the next player to fall when they jammed their stack into the middle holding ace-jack suited and they were called by Wegner who had him dominated holding ace-queen suited. Hempel fell way behind after Wegner flopped a queen, whiffed the turn and river ending his tournament in seventh place.

Vincent "veepoh" Pontrello then bowed out in sixth place and not long after, Jim "Bocaratone" Collopy jammed king-jack suited only to run into the ace-king of Wenger. Both players connected with the flop but Collopy was still trailing and couldn't catch up sending him home in fifth place.

Jonathan "Art.Vandelay" Dokler, who took down Event #1: $500 No-Limit Hold'em Kick-Off, found himself as the short-stack and he got his remaining chips in holding king-jack suited but ran into Wegner's pocket kings, ending his night in fourth place.

Three-handed action saw Lyons hold a significant chip advantage and they made quick work of Wenger eliminating him in third place and Chris "NJ_GLive"Ginley took their exit in second place for $106,508.19 shortly after.

The next tournament on the schedule – Event #18: $1,000 No-Limit Hold'em 8-Handed Turbo DeepStack – will take place at 3 p.m. PDT on Saturday. The PokerNews Live Reporting Team will once again be reporting all the action, so be sure to tune in then to see who captures the fourth bracelet of the 2020 WSOP!