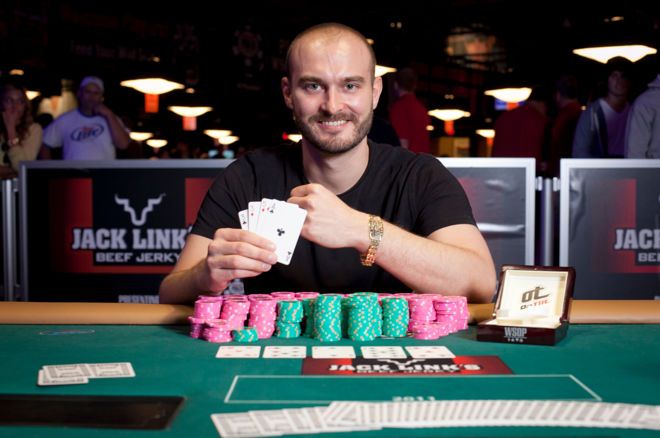 Outside of two live cashes, one each over the past two years, the poker world hasn't seen a lot of Binger. He had a single cash in 2015, and before that had not been very active since 2013, which is when he notched a half dozen cashes at that year's WSOP.

Binger had to contend with WSOP bracelet winner Ryan "Adopt_aDogg0" Leng in heads-up play. The latter actually began with a 4:1 chip lead and was seemingly on the verge of capturing his second gold bracelet, but Binger was not to be denied. He scored back-to-back doubles to pull out to a chip lead of his own and eventually closed it out.

Binger began the final table as the chip leader and it didn’t take them long to absorb the short stack of Christian “CalcFather” Calcano, who got it in with ace-nine suited but failed to win a flip against pocket eights.

Not long after, Matt “Berkey11_S4Y” Berkey was denied his first bracelet when he got it all in preflop with ace-ten only to see Philip “eric_shun” Beesley river a straight with king-queen. He was followed out the door by Norman “abnormality” Michalek, who got his short stack all in preflop with ace-ten against two players. Leng wound up making a pair of threes and that was all she wrote for Michalek.

Leng then jammed the small blind to put the pressure on the short-stacked Mark “bansman” Bansemar, who called off with pocket sevens in the big. He was primed to double against Leng’s jack-three, but a river jack put a dagger through his heart.

At that point, Leng had opened up a pretty good chip lead with half the chips in play, but Binger closed the gap a but dispatching Ian “aulululululu” Waldron in fourth place. It happened when the former’s ten-seven rivered a heart flush to overcome the latter’s king-nine.

During three-handed play, Beesley bluffed the river only to get snap-called by Leng, who had flopped a gutshot straight draw but went runner-runner for the nut flush. Leng took a 4:1 chip lead into heads-up play against Binger, but the latter managed to double up to make a game of it.

The duo battled for a while before Binger opened up a lead and then finished it off when his king-eight found a cowboy on the flop to crack Leng’s pocket nines all in preflop.

The next tournament on the schedule – Event #25: $500 No-Limit Hold’em Summer Saver – will take place at 3 p.m. PDT on Saturday. The PokerNews Live Reporting Team will once again be reporting all the action, so be sure to tune in then to see who captures the next 2020 WSOP bracelet!