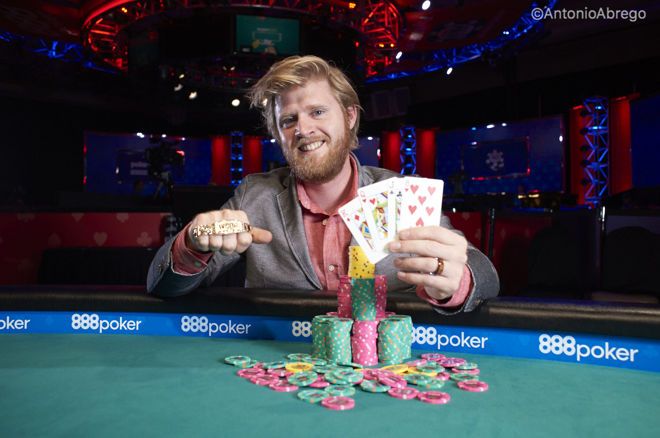 "I started playing [poker] when I was 13, so poker has always been a big part of me," he said in 2017 after his first WSOP win. "I think it's just about maintaining a balanced life. I got engaged recently and been living in Hawaii and it's just having the ability to realize that poker isn't everything. It's the people around you. It's about everywhere you end up in life that you are able to make a difference at. So, hopefully, I can make a difference after this."

Gamble gave his first bracelet to his father, who always supported his poker endeavours. Only time will tell where the second one will go.

Simon “bagelbites” Lam, who has cashed in five of six events thus far in the series, was the first final table casualty after getting it in with kings down on a queen-high flop only to have “danish01” turn the winner when an ace spiked, giving him both a pair of aces for the high and a low.

Timothy “SSJTimmy” Batow was the next to go in a three-way pot where he ended up with two pair only to see Tom “hansdigalo” Schwartz roller over trip eights, and then Schwartz wound up followed him out the door in fourth place getting it in on a high flop with aces only to see Gamble roll over two pair, which held on the turn and river.

After John “rainman3817” Esposito bowed out in third place – the result of getting it in on the turn with a straight only to see Gamble table a flush – the heads-up match was set with Gamble holding an 8:1 Chip lead over Shane “danish01” Daniels.

Despite the disparity, it proved to be a back-and-forth affair with Daniels even taking over the chip lead at one point. However, Gamble battled back and managed to seal the deal in a big all-in preflop hand. Daniels had gotten it in with kings and queens while Gamble had both high and low options. Gamble would end up making a seven-high straight and that was good enough to earn him his second WSOP bracelet.

Told my wife this was my best chance at a bracelet.... so I did a thing. Thanks for the support everyone! https://t.co/Ak1jgNPr96

The next tournament on the schedule – Event #7: $800 NLH Knockout Deepstack– will take place at 3 p.m. PDT on Tuesday. The PokerNews Live Reporting Team will once again be reporting all the action, so be sure to tune in then to see who captures the next 2020 WSOP bracelet!

The Muck: Mike Matusow Chastised After Threatening Player Who Busted Him