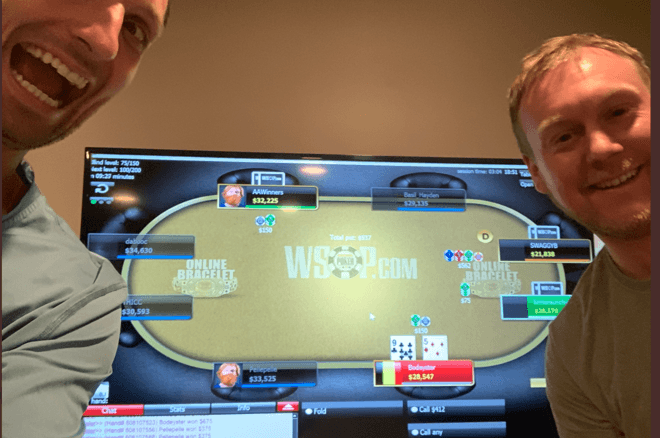 According to his Twitter profile, @Matt_Bode79, Bode is a Behavior Therapist and U23 WFDF Gold Medalist, as well as an online MTT grinder. Amazingly, Bode had called his shot back on June 29 via Twitter.

“Here goes to becoming a secret online crusher,” he wrote. “Using pios solvers programs poker coaching sites backers and discord to ship a bracelet. No retweets when this ages well.”

He willed it into existence and accomplished the feat from the comfort of his dad’s basement (he even tweeted the attached photo to prove it).

Not surprisingly, the final table was a quick affair. One player making his second final table appearance through four events was Shawn “Saygoodnight” Daniels, who finished fourth in Event #1: $500 NLH Kickoff. He fell in eighth place after getting it all in preflop with ace-king only to fall to Kevin “ImaLuckSac” MacPhee’s king-queen after the latter flopped two pair.

With five players remaining the stacks were extremely shallow with the big stack having just 10 big blinds. With six-minute levels, it was only a matter of time before players hit the rail including MacPhee, who got unlucky holding ace-queen against Bode’s ace-ten when a ten flopped.

Bode would go on to dispatch Frank “spaghettiii” Marasco in fourth place, and after “KTUUUH” exited in third, the title came down to Bode and Brian “XcrazylegsX” Frasca. The latter began with a chip lead but with the blinds so big the swings were huge. Eventually, Bode claimed the lead and closed things out when his queen-seven got lucky against Frasca’s ace-queen.

I just won a bracelet

The next tournament on the schedule – Event #5: $1,000 NLH Freezeout– will take place at 3 p.m. PDT on Sunday. The PokerNews Live Reporting Team will once again be reporting all the action, so be sure to tune in then to see who captures the next 2020 WSOP bracelet!