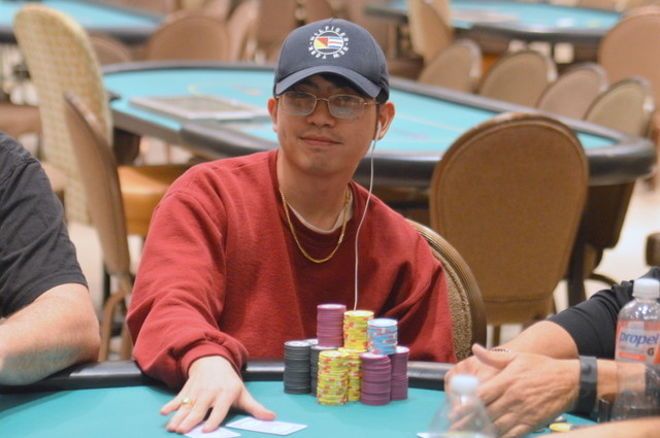 Huynh has amassed mid-six figures in online winnings grinding in New Jersey, and in the live realm has $212,130 in career earnings according to HendonMob. That includes a career-high $80,298 for finishing second in the 2020 Parx Big Stax XXXII back in February. The year before that, he finished fifth in the 2019 Borgata Summer Poker Open Event #16: $2,700 NLH for $69,801.

Kenneth “KBconcepts” Phillips began the final table as the chip leader with Vincent “meatball44” Ablahani and “namhtiw1” hot on his heels. The other six players lagged behind, and it was no surprise to see a couple of them exit early.

READ MORE: Everything You Need to Know to Compete for a 2020 WSOP.com Online Bracelet

Paul “Debt2Me” Gunness was the first to go after failing to get lucky with ace-four suited against the pocket jacks of “namhtiw1,” who then picked up Big Slick to bust Michael “vapor098” Federico and his ace-jack.

Despite the early success, “namhtiw1” wound up going next after losing a big flip with pocket nines to Huynh, who had ace-king and flopped Broadway. Hunter “Hunt_Dizzle” Frey then got his chips in on the turn with trip jack and had to fade the straight and flush draws of Huynh. Unfortunately for Frey, that was easier said than done as the rivered delivered his opponent a diamond flush.

Phillips busted in fifth place when his ace-ten failed to overcome the pocket sevens of Ablahani, and then Sang “youngkoi” Lee lost a flip with jacks against Huynh’s ace-king suited to fall in fourth.

“610610” proceeded to bust Ablahani in third place when the duo got it in on the turn with the former holding a set of sixes to the latter’s top two pair, and that allowed “610610” to take a nearly 2:1 chip lead into heads-up play against Huynh.

Despite starting at a disadvantage, Huynh fought his way into the chip lead and closed things out in a hand where both players had trip sixes, but Huynh’s three kicker actually improved him to a winning straight.

The next tournament on the schedule – Event #20: $500 PLO 6-Handed – will take place at 3 p.m. PDT on Monday. The PokerNews Live Reporting Team will once again be reporting all the action, so be sure to tune in then to see who captures the next 2020 WSOP bracelet!