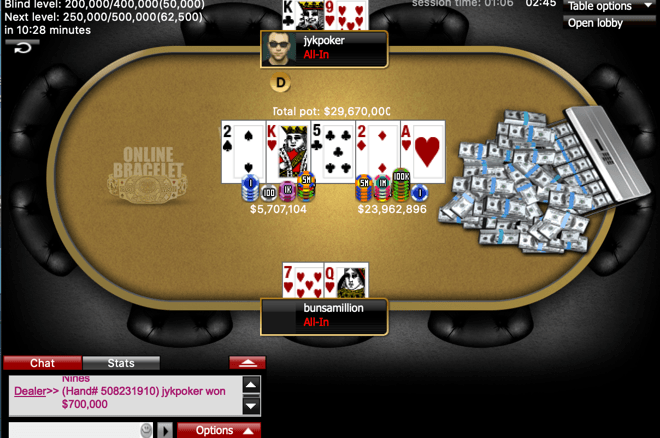 Prior to the win, Kim had 11 WSOP-related cashes totalling a modest $19,113. Five of those cashes have come in WSOP.com events, including an 87th-place finish two days prior in the $1,000 NLH Freezeout event.

Two-time WSOP gold bracelet winner Eric "CircleBall" Baldwin finished in 3rd place ($44,914), while Jeff "mavsusc" Platt finished 7th for $12,657 after entering the final table as the chip leader. The host of the PokerNews Podcast live-streamed his deep run for thousands of excited poker followers on Twitch.

Poker commentator and PokerNews Podcast co-host Jeff “mavsusc” Platt began the final table with the chip lead, but it proved to be a contentious affair with multiple players pulling out in front. “thehofffx” was the first to fall after losing a flip with Big Slick to the pocket jacks of “smallmytable,” and then “fan_sawyer21” followed after suffering a bad beat with ace-ten against Eric “CircleBall” Baldwin’s ten-nine when a nine spiked on the turn.

At that point, the stacks had evened out a bit and Platt saw his run, which he was streaming in Twitch, come to an end in a blind-versus-blind hand against Kim, who shoved the small blind with queen-jack. Platt called off getting it in good with king-deuce suited, but he wasn’t rewarded for it as a queen spiked on the flop.

Well, we play for the win, and that clearly showed!! I love you guys so much...will have more to say tomorrow, but… https://t.co/fhH4IlczuW

Kim then eliminated “smallmytable” in sixth place when his ace-nine held against king-jack, and then Ian “APokerJoker2” Steinman took his leave failing to get there with ace-jack against the pocket kings of “bunsamillion.”

With four players remaining, two-time WSOP bracelet winner Baldwin’s Big Slick held against Jason “Gunner_Q10” Gunn’s ten-jack suited to dispatch the latter, but Baldwin soon followed him out the door after running sevens into Kim’s aces in a big pot.

Kim began heads-up play with a nearly 5:1 chip lead over “bunsamillion,” and it didn’t take long for him to close the deal when his king-nine flopped top pair against queen-seven all in preflop.

The next tournament on the schedule – Event #7: $800 NLH Knockout Deepstack– will take place at 3 p.m. PDT on Tuesday. The PokerNews Live Reporting Team will once again be reporting all the action, so be sure to tune in then to see who captures the next 2020 WSOP bracelet!

Battle Against Sam Trickett With a Free $1,000 Buy-in