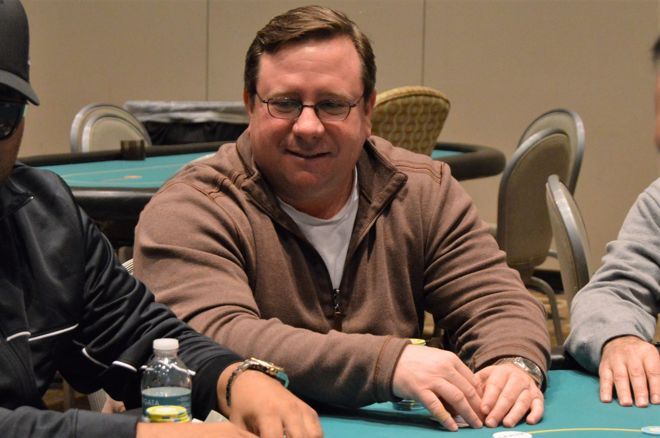 According to HendonMob, Lessin has $158,814 in live tournament earnings including a career-best $87,998 for winning a $1,090 NLH event at the 2011 Borgata Winter Poker Open. As far as the WSOP is concerned, prior to the win, Lessin had seven WSOP-related cashes (all from WSOP.com) totaling a modest $5,218. That included two small cashes in earlier bracelet events.

There's still some events left as part of the WSOP.com portion of the WSOP Online. The PokerNews live reporting team is on top of all things WSOP. Don't miss a beat!

The first final table elimination was that of East Coast grinder Al “BigAl16” Riccobono, who got his short stack in with ace-ten only to run into the ace-king of Allen “Nucman” Pock, who began the final table as the chip leader.

Carmen “cjdstable” Dimaria was the next to go after having pocket jacks cracked by the tens of Brian “ggtdm” McGill, and then Michael “bigfatpirate” Whidden bowed out when their ace-king went down in flames to the queen-nine of James “muskrrr” Moore, which rivered a straight.

Minutes later, Stuart “dusty16” Kemble bowed out in sixth place when their king-five failed to get lucky against the king-queen of McGill, and then Gregory “gwitsch” Witsch followed them out the door when their ace-five was outdrawn by Pock’s ten-nine.

McGill took his leave after three-bet jamming with king-four suited only to get called by and lose to Pock, who held with ace-five. Despite winning that hand, Pock was next to go after getting it in on the turn with two pair only to see Moore turn over trip fives.

Moore took a more than 6:1 chip lead into heads-up play but Lessin fought hard and took over the lead. After a bit of jostling, Moore jammed a five-high flop with ace-high only to get called by Lessing's top two pair, which turned into a full house on the turn for the win.

The final tournament on the schedule – Event #31: $500 NLH Championship – will take place at 3 p.m. PDT on Friday. The PokerNews Live Reporting Team will once again be reporting all the action, so be sure to tune in then to see who captures the next 2020 WSOP bracelet!