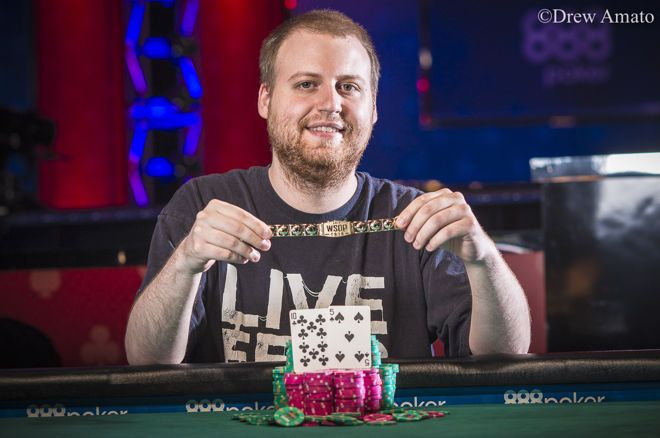 Five years ago, McKeehen etched his name in poker history by topping a field of 6,420 players to win the Main Event for $7,683,346. Two years later, he showed just why he’s one of the best in the world by taking down the 2017 WSOP Event #38: $10,000 Limit Hold’em Championship for $311,817. Now he’s a three-time bracelet winner joining players like David “Chip” Reese, Dewey Tomko, and Lyle Berman – all Poker Hall of Famers.

McKeehen played a patient game at the final table, carefully biding his time and picking his spots. In fact, he didn’t notch a final table elimination until the last one.

David “newjerz05” Jackson was the first final table casualty after four-betting jamming king-queen suited only to run them into the pocket aces of “SoccerDJ,” who in turn busted Nathan “innate9” Russler in seventh place ace-queen against ace-five.

Unfortunately for Maguire, he saw his lead evaporate as the blinds went up. He would eventually try to steal from the small blind with jack-three suited but Frank "thewholefunk" Funaro defended with ace-seven, which held to dispatch the bracelet winner in sixth place.

“SoccerDJ” was next to go after their jack-ten failed to overcome Funaro’s ace-three, and a couple of hands later Funaro won a race with pocket sixes against Roland “prngls12” Israelashvili’s ace-nine. Israelashvili, who was at his second final table of the series, had to settle for third place and $148,975 in prize money.

The heads-up match was a battle of New Jersey players with Funaro holding 9.1 million to McKeehen’s 3.2 million. The former Main Event champ used his experience to seize the chip lead and close the deal when Funaro three-bet jammed with seven-six suited and McKeehen called with ace-nine. Funaro failed to catch and had to settle for second place and $219,089 in prize money.

McKeehen played a patient game at the final table, carefully biding his time and picking his spots. In fact, he didn’t notch a final table elimination until the one that ultimately secured him victory.

The next tournament on the schedule – Event #15: $1,000 PLO 8-Max High Roller – will take place at 3 p.m. PDT on Wednesday. The PokerNews Live Reporting Team will once again be reporting all the action, so be sure to tune in then to see who captures the next 2020 WSOP bracelet!