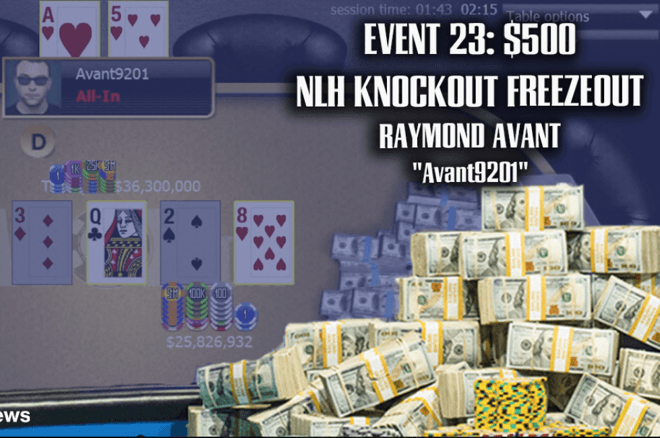 It marked Avant's first-ever WSOP cash, and according to HendonMob, he has no live tournament cashes.

Bracelet winner Dan “pepperprince” Zack began the final table second in chips, but he found himself on the short stack after his missed flush-draw bluff was picked off by Scott “intheblack14” Epstein. Not long after, he ran queen-jack into the ace-king of Upeshka “gomezhamburg” De Silva to fall in ninth place.

Michael “mikeob81” O'Brien then busted in eighth place after losing a flip with ace-king against Epstein’s pocket tens, and then Avant used pocket tens to dispatch Dilip Kumar “dogmai” Natarajan, who had eights. The latter flopped a set only to see the former river the two outer.

From there the eliminations came quickly with the rest of the competition falling within 20 minutes. Zachary “kings702” Grech lost with nines against the king-six of “avant9201” after a king spiked on the flop, and then Avant used jack-seven suited to bust Byung Jun "YESUM1987" Kim, who had gotten it in with king-queen.

De Silva, a two-time bracelet winner, was the next to go when he got his short stack all in with ace-king only to be outdrawn by Epstein’s nine-deuce, and then Avant woke up with aces after Ryan “im.sorry” Torgersen had jammed with queen three. Torgersen failed to get lucky and notched a third-place finish to go with his win and runner-up performances earlier in the series (he should now hold a firm lead atop the Championship leaderboard).

Heads-up play began with both players fairly even in chips, but Avant managed to pull out to a big lead before it all came down to a flip. Epstein was at risk and looking to hold with pocket fours against ace-five suited. Unfortunately for Epstein, a five appeared on the flop and he had to settle for second place.

The next tournament on the schedule – Event #24: $400 No-Limit Hold’em 8-Handed – will take place at 3 p.m. PDT on Friday. The PokerNews Live Reporting Team will once again be reporting all the action, so be sure to tune in then to see who captures the next 2020 WSOP bracelet!