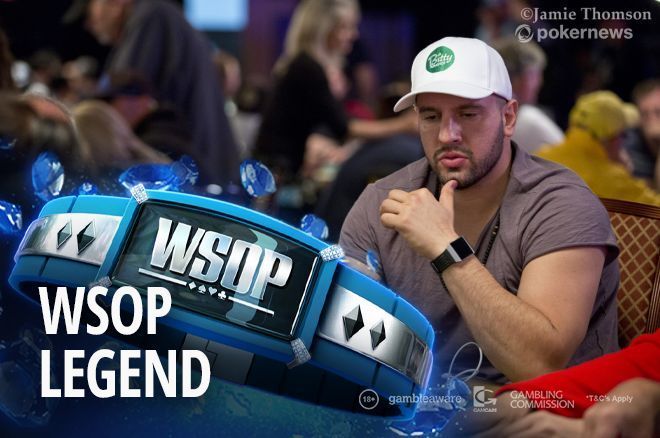 COVID-19 forced the postponement of the 2020 World Series of Poker in Las Vegas. In lieu of being able to live report this year's summer series, PokerNews has decided to relive some of the memories of past WSOPs, honor legends of the game and mark the legendary feats accomplished over the past fifty years.

Today, we look at Michael "The Grinder" Mizrachi who, on this day in 2018, won the $50,000 Poker Players Championship for a record third time, cementing his place as a bona fide WSOP Legend.

The World Series of Poker Main Event is the one poker tournament every player dreams of winning one day. Thousands upon thousands of players join in for their shot of glory, and the field is littered with recreational players that qualified into the $10,000 tournament, often having saved up for years to play in their one dream event, to rich businessmen giving it a shot in their favorite pastime.

The beauty of the Main Event is that every player has a shot at winning all the marbles. Whether it's "beyond fairytales" and "inconceivable" like Chris Moneymaker's 2003 victory, or family man Jerry Yang calling upon divine intervention during his 2007 miracle run, the recreational player always has a chance of winning it all in the end.

Well, enter the $50,000 Poker Players Championship (PPC) and the amateur's chances go out the window. Ever since it's inception in 2006, the PPC has been considered the de-facto tournament where the best of the best take on one another and duke it out in a variety of poker games. Imagine playing the likes of Phil Ivey, Phil Hellmuth, and Daniel Negreanu five days in a row in a short-handed format.

Needless to say, the hefty price tag coupled with a small, elite field created a legacy for the PPC where champions are considered among the greatest overall poker players. A quick glance at its fourteen-year history shows nothing but greatness among champions, from John Hennigan to Mike Gorodinsky, and with the late David "Chip" Reese as perhaps the event's most fitting inaugural champion back in 2006.

Winning one is the poker professional's dream. Winning two? You're in a league of your own. But winning the toughest event with poker's best three times? Only one man achieved that improbable feat on this day back in 2018, after winning his first two titles in 2010 and 2012: Michael Mizrachi.

Before we look back at 2018, we jump further back in time to 2010, the year of Mizrachi's first victory. After the idea of a prestigious, massive mixed game event was conceived in 2006, the first three years were being played out as the $50,000 H.O.R.S.E. championship, a five-game rotation of Limit Hold'em, Omaha Hi-Lo, Stud Hi, Stud Hi-Lo, and Razz, with the 2006 final table played out in NLHE for TV purposes.

2010 marked the first time the tournament expanded to the eight-game format it's known for today: 2-7 Triple Draw added an exciting draw-game to the mix, while big bet games No-Limit Hold'em and Pot-Limit Omaha dramatically increased the overall skill required and drew limit-professionals out of their comfort zone. Ever since then, the tournament has been known as the Poker Players Championship.

The tournament drew 116 entrants and offered $1,559,046 as a first-place prize, with David Oppenheim, John Juanda], and Daniel Alaei notching a seat at the final table. Michael's brother Robert Mizrachi also made the final table, ultimately bowing out in fifth place, while Oppenheim and Juanda finished in third and fourth, respectively. Russia Vladimir Schmelev was the runner-up to Mizrachi.

While "Grinder" now has five bracelets to show for, back then he was holding the mantle now worn by the likes of Dan Smith: being considered one of the 'best players without a bracelet'.

"This was definitely worth the wait," Mizrachi said with a smile back in 2010. "It's one of the most prestigious events you can possibly win…especially with my brother in there. I put his chips to good use!"

With the proverbial monkey off his back, Mizrachi won a second bracelet in 2011 at the World Series of Poker Europe. In 2012, he was among the 108 players that put up $50,000 each to contest across eight different games. The eight-handed final table featured Chris Klodnicki, Luke Schwartz, and a young Stephen Chidwick, with each of them challenging for the $1,451,527 on top. Another young prodigy at the time, Viktor "Isildur1" Blom, was leading the tournament with 26 remaining but was ultimately eliminated in 14th place.

"Grinder" started the final table off with a bang, extending his chip lead even further by winning the first three hands in a row and knocking out Bill Chen and Bruno Fitoussi in the same hand on #3. As if it were a bounty tournament, Mizrachi then busted Chidwick in PLO, with the UK's and long-time GPI #1 having to wait another five years before finally winning his first bracelet.

Ultimately, the tournament came to a showdown between Mizrachi and Klodnicki, with the former spotting a 2:1 lead over his rival. It became a one-sided affair with Mizrachi running away with it, ultimately making a straight in Omaha Hi-Lo to win PPC #2.

"It's quite an accomplishment," Mizrachi said back in 2018. "To win the first one was amazing. The second one was great. The third one is unheard of."

The event had already drawn headlines across the poker world as, besides Mizrachi, Phil Ivey was making a splash in the event as well. Ivey's attempt to win bracelet #11 ultimately came up short in 9th place, but Mizrachi seemed destined to win it after already bagging a massive lead after Day 2 of the five-day event.

The epic hot run continued for Mizrachi at the final table, making him a sure-fire first-ballot Poker Hall of Famer in the near future. "I never had big swings this whole tournament," Mizrachi admitted. "All the cards went my way. I hit a bunch of hands. Everything went my way. I just won every pot."

Even with two PPC-victories under his belt already, Mizrachi's unconventional playing style has earned him his fair share of doubters. After his third victory, he feels even they have to give him credit at this point.

"I think I've done enough to where people will give me the respect I deserve," he said. And after winning his fifth bracelet in Stud Hi-Lo a year later, none will doubt that "The Grinder" has earned his stripes and ranks among the poker legends.

After inaugural winner David "Chip" Reese's passing in December 2007, the World Series of Poker has awarded the Chip Reese Memorial Trophy to every winner of the PPC since 2008.