This Day in WSOP History: Phil Hellmuth Wins Bracelet No. 12 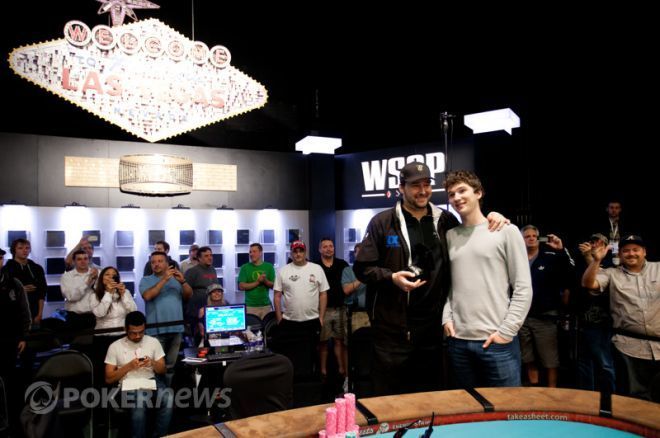 As the 2012 WSOP dawned, Phil Hellmuth already held the record for most WSOP bracelets. His 11 wins ranked one above the 10 held by Doyle Brunson and Johnny Chan, and Hellmuth had a golden opportunity to put some distance between himself and the field what with neither of his two closest competitors having won one since 2005.

Thus, when Event #18: $2,500 Razz reached its third day with 18 of 309 left, Hellmuth had to feel anxious and excited for the chance to break his cold streak. Only thing was, each of his previous 11 bracelets had come in hold'em events, so he'd be breaking new ground with a win.

Hellmuth Coasts to Heads Up

"The Poker Brat" ranked third in chips of the final 18 but was essentially tied with the top two, Brandon Cantu and Brendan Taylor.

Hellmuth caught some heat early as he got lucky to bust Chris Wallace and Jared Bleznick, winning with two slightly worse hands en route to the final table. Only Taylor had outpaced him, so he sat second of the final nine.

Fellow multiple-bracelet winners Cantu and Barry Greenstein advanced to the final six, but it was there "Robin Hood of Poker" would go down.

Hellmuth caught fire after that. He got max value with a nine-low then made a strong hand on the river to take a big pot off Taylor. Four-handed, he surged past 1.2 million, giving him a stack that covered Cantu, Don Zewin and Scott Fischman combined.

Fischman would fall to Zewin, then Hellmuth's eight-low on fourth held against Cantu's nine-low to get it heads up. Victory seemed likely as Hellmuth was up 5-to-1 in chips and had been the dominant force for most of the final table.

Zewin was hungry for his own bracelet having never tasted victory despite cashes dating to 1989.

He'd make an early move to get stacks close when Hellmuth's aggression holding a vulnerable nine-low with a wheel draw didn't pay off. Zewin had a good draw to a seven and made it on the river, chipping up to about 1 million while Hellmuth had 1.3 million.

However, Hellmuth would would reassert himself from there, and he slowly ground Zewin down across more than two hours of play. Zewin lost a huge chunk of his stack calling down with a jack-high board against a ten-high one and folding river. Finally, he made his stand with three to a nine against three to a wheel. Despite Hellmuth making only a jack-ten, Zewin needed help on the river with a jack-nine draw.

Zewin drew a pair to end his comeback bid and secure Hellmuth his unprecedented 12th bracelet.

Hellmuth told PokerNews the win felt "incredible." He admitted to feeling some nerves when his lead was in question heads up, but ultimately said the victory with his son present meant everything.

"To have him come here, it means so much to me as a father," he said.

Of course, the years since have only seen Hellmuth add to his bracelet total, running it up 15 while the second-place field remains stuck at 10. He'd show off his razz prowess again three years later with a win in the $10K, proving he's more than just a no-limit specialist, and he remains one of the top bracelet threats in any given summer these days.