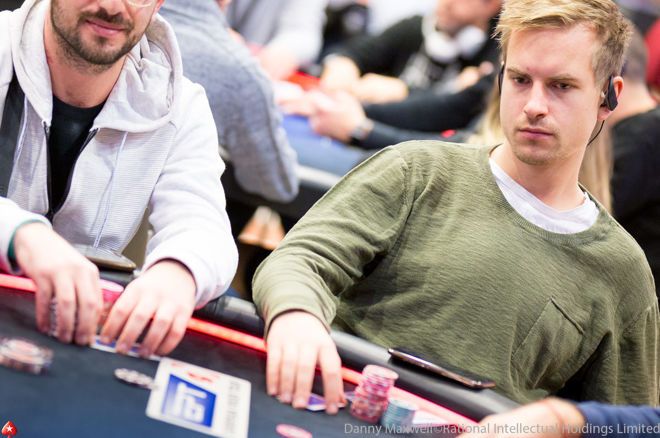 The Super High Roller Bowl Online Series has crowned all but two of its champions and that champion will be revealed under the watchful eye of the PokerNews Live Reporting team. Before the $102,000 Super High Roller Bowl shuffles up and deal at 8:00 p.m. CET on June. 1, let’s take a look at the events that lead up to it.

The Austrian found himself heads-up with Russia’s Artur Martirosian after the six other finalists, which included Team partypoker’s Mikita Badziakouski and Kristen Bicknell, crashed out.

Eibinger sent his Russian foe to the showers as he collected the top prize, leaving Martirosian to increase his bankroll by $150,500.

There aren’t many poker events that Sam Greenwood hasn’t triumphed in and now he can wipe a Super High Roller Bowl online event off his list. Greenwood went to battle at the final table with the likes of David Peters, Timothy Adams, Nick Petrangelo and Vyacheslav Buldygin to find Christoph Vogelsang waiting for him heads-up.

This pair have clashed dozens of times on the live circuit and know each other’s game inside out. This battle went Greenwood’s way, meaning the Canadian scooped $399,000, leaving Vogelsang to win $262,500.

The final table of this event was extremely tough, but Blom shone through. Ali Imsirovic, Jake Schindler, Timothy Adams and Mikita Badziakouski all busted in succession. Even Steve O’Dwyer couldn’t halt Blom’s run.

The hyper-aggressive Swede battled with Team partypoker’ Isaac Haxton, a battle he won, and secured his third SHRB title and another $195,250.

Eibinger had to make do with second-place in this event, a result that saw Eibinger collect $15,150.

Others who reached the final table were Badziakouski, Poker Central’s Dan Shak, Darrell Goh and Joao Vieira, the latter falling in third for $92,400.

Sergi Reixach fell in sixth before Badziakouski secured yet another cash. Badziakouski’s teammate Isaac Haxton busted in fourth before Goh exited in third. This left Chidwick and Martirosian as the last standing duo.

The final hand saw the chip go in on a five-high flop, Martirosian holding pocket queens and Chidwick king-five. A king on the river came to Chidwick’s rescue and awarded him the title.

Greenwood won his second event in the space of a couple of days by taking down a $10,300 six-handed affair. Again, a pair of Team partypoker members were at the final table, but they couldn’t quite go all the way.

Haxton busted in fourth for $45,000 with Bicknell falling in third for $65,000. Bicknell’s exit left Dan Smith and Greenwood to fight it out one-on-one for the title and the lion’s share of the prize pool.

There was almost $75,000 difference between first and second place but these Goliath’s of the poker world didn’t care about that and played the tournament out as it was intended. This meant Greenwood won $200,000 when he emerged victoriously leaving Smith to scoop $127,972.

The events on May 31 swapped to one-day affairs so players can concentrate on the $3 million guaranteed spectacular on June 1-2.

Vousden defeated Timothy Adams heads-up for the title and the bulk of the prize pool. Adams can’t be too disappointed with second place as it awarded $180,250.

Thomas Muehloecker was the only other player to net six-figures from his investment. Muehloecker banked $128,750 when his tournament ended abruptly in third-place.

We can't wait to see more bluffs like this

Linus Loeliger won more than $1 million only a few weeks ago and yesterday netted another $520,000. He had a tough time of it at the final table of the last $25,500 event of the series because the final table was stacked beyond belief.

Haxton, Vogelsang, George Wolff and Adams all busted, Adams winning another six-figure prize. Alex Foxen then busted for $148,000 and was joined on the rail by his girlfriend Kristen Bicknell who collected $236,000.

Loeliger fought with Martirosian heads-up and the latter had to make do with another runner-up finish. This one weighed in at $352,000 so it’s difficult to feel sorry for him!

That man Martirosian was at the final table, but he ran out of steam in third-place for $114,400.

The Russian’s exit left Badziakouski and Addamo to play one-on-one for the title. Addamo outwitted his talented opponent to get his hands on the top prize, leaving Badziakouski to bank $162,800.

The $3 million guaranteed Super High Roller Bowl is a two-day event that starts at 8:00 p.m. CET on June 1. It commands a $102,000 buy-in and is being played out with the PokerNews Live Reporting team in attendance bringing you coverage of this epic event.

Be sure to tune into our live reporting pages as we bring you all the action from the first pitched cards down to the final hand.