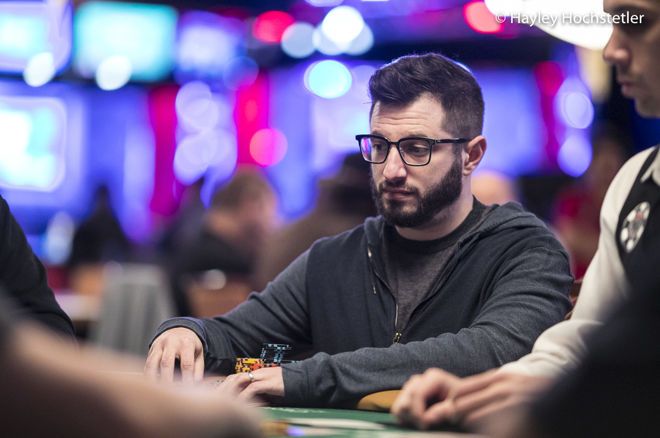 Two matches down, and two victories in the books for [B]Phil Galfond in the ongoing Galfond Challenge, his eponymous series of high-stakes heads-up matches.

While the match against Ioannis "ActionFreak" Kontonatsios didn't quite bring the drama of the "Venividi1993" one that Galfond won in a squeaker, it did bring plenty of big pots. Bigger, in fact, than had been seen in the first match since the stakes were €150/€300 rather than "merely" €100/€200.

Once again, PokerNews decided to go back through the coverage of the 15,000-hand match and pick out the biggest pots the two nosebleed grinders played on Run It Once Poker and partypoker.

Check Out Run It Once Poker for their great promotions!

One of ActionFreak's biggest wins could have been far bigger if not for an unfortunate river that cost him the biggest pot of the entire challenge.

They were two buy-ins deep when Galfond three-bet preflop and called a four-bet to €8,100 from his Greek opponent. The flop came

and ActionFreak bet €10,691. Galfond check-called the wager, bringing a

. Galfond liked the card enough to come out potting for €37,581. He had just €4,642 back and ActionFreak set him in for that amount. Galfond called and was in rough shape.

ActionFreak had the superior hand in every way — better spades, better straight draw, better kicker for his king. Unfortunately for him, the

brought deliverance for Galfond and sent the €122K pot his way.

Galfond three-bet preflop to €2,700 then checked the

turn. Galfond went with a small sizing of €7,126. ActionFreak responded by potting to €42,976. Galfond had a tough decision but tank-shoved for €47,173 and ActionFreak called.

for top set with a straight blocker, but ActionFreak nonetheless held the nuts with

ActionFreak was the three-bettor to €2,700 in this hand, with Galfond calling to see a

flop. ActionFreak opted to check and call €3,671. Galfond continued betting with a pot-sized wager of €12,741 on the

ActionFreak shoved for €50,322, and Galfond took a long time in the tank before calling with

for a wrap. ActionFreak was in great shape with

for top two with a flush draw, but once again a six on the river — the

ActionFreak three-bet preflop and continued with a half-pot sizing of about €2,700 on

. Galfond called and a

arrived. ActionFreak continued his aggression by potting for €10,798. Galfond stayed sticky, bringing a

Galfond had €44,987 and shoved. With €109K in the pot and only about €12K to call, ActionFreak nonetheless clicked fold, so Galfond won the huge pot without needing to show his hand down.

ActionFreak three-bet preflop and Galfond called €2,700. On the

flop, ActionFreak continued for half pot, €2,699. Galfond called and ActionFreak slowed down with a check on the

turn. Galfond potted for €10,798 and ActionFreak called. The river was the

This time, it was ActionFreak shoving for €39,446 and giving his opponent a sick price on a call. Once again, the bait went unheeded as Galfond found the fold button and conceded a six-figure pot similar to the one he dragged on Day 14.

ActionFreak raised and Galfond three-bet to €2,700. ActionFreak called and a fairly dry

flop hit the board. Galfond bet €1,781 and ActionFreak called, bringing a

Galfond had a pair and a wrap but needed help against top two. The

river was a brick for him, and ActionFreak collected one of two six-figure pots that day.

In the other, Galfond was the three-bettor for €2,700 and ActionFreak called to bring a

Galfond had flopped big with

, top two and a gutter, but he trailed

for bottom set. The

. Galfond raised small to €6,262 and ActionFreak called, bringing a

ActionFreak tanked briefly before calling with

for a straight to the king. Galfond just had

ActionFreak had flopped top two but was fading a piled of cards. An

turn completed Galfond's straight and ActionFreak didn't fill up on the

There seemed to be something in the water on Day 5 as three of the 10 largest pots went down that day.

The smallest of the three but the first chronologically began with Galfond raising and calling a three-bet to €2,700. ActionFreak slowed down with a check on

Galfond could only show down

for total air and a straight blocker. ActionFreak had

for an eight-high straight to secure the pot.