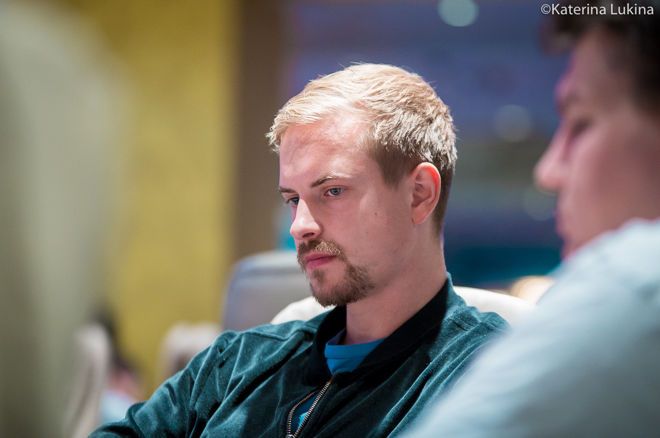 Perhaps no name in poker quite stirs up nostalgia of fans like Viktor "Isildur1" Blom.

The online cash legend experienced a meteoric rise and subsequent crash in the online nosebleeds that was watched by countless enraptured railbirds worldwide, and to this day, his poker exploits will pique the interest of many a fan.

Well, exploits have abounded the past few days as Blom has registered a red-hot run of tournament success in the Super High Roller Bowl Online series on partypoker.

Blom in the SHRB

The Super High Roller Bowl Online began on Saturday, and that's the same day Blom began his dominating run in the series.

He made Day 2 of Event #2: $25K 8-Max with the second-place stack and advanced to the streamed final table of six neck-and-neck with Chris Hunichen atop the counts.

As expected, those two advanced to heads-up play, with Blom having nosed into the lead after busting Mark Davis in third. Blom showed off some impressive plays on the PokerGO stream, pulling off several hero calls and hero folds. However, Hunichen ultimately picked off Blom's triple-barrel with an ace-high calldown to relegate Blom to a second-place finish worth $320,625.

However, that proved a mere appetizer for Monday.

In the third $25K of the series, Blom again made the final table, this time with a middle-of-the-pack stack. He had a swingy day, contending for the lead at times and sinking into the bottom of the counts at others, but he managed to navigate to heads-up play once again.

This time, Blom would face Dan Smith. While he had a fairly even set-up against Hunichen, Smith had crushed the latter stages of the final table and held a sizable chip lead. Thus, their match lasted just a few minutes before Smith rolled his 5-to-1 lead into a win. Blom settled for $365,500.

While that final table was happening, though, Blom was busying himself with winning the day's second chance event, a $10,000 buy-in. There, he topped a field of 75, besting Christoph Vogelsang heads up to bank $213,750.

Holding the chip lead, he advanced to face Mike Watson heads up. While Watson made a battle of it as they played for around 45 minutes, Blom would find a dream spot, turning a wheel against Watson, who check-raised the flop with bottom pair and turned aces up. Watson wouldn't escape the cooler with any chips, conceding the victory and the tournament to Blom, who collected another $407,500 in winnings.

Less than a week in, that's two victories and two runner-up finishes for Blom.

For those newer to poker, Blom may not register as the superstar he once was, as he doesn't regularly play the biggest public-facing games like the super high roller tournament circuit.

Back circa 2009, though, he was perhaps the most talked-about poker player on the planet — at least under his screen name "Isildur1." That name had appeared at the highest stakes cash games on Full Tilt Poker seemingly out of nowhere and begun crushing some of the top players in the world.

Tom Dwan, considered the end boss of the no-limit scene by many, was the highest-profile roadkill on Isildur1's rampage, losing an estimated $3 million.

He battled the likes of Phil Ivey and Patrik Antonius, but it was a controversial match with Brian Hastings that would prove detrimental to Isildur1's bankroll as Hastings took him for more than $4 million. Controversy ensued when Hastings let slip that he'd used shared hand histories to devise his strategy, a violation of the site's terms of service.

Despite the massive bump in the road, Isildur1 continued to play some of the biggest games on the planet. Speculation about the player's identity swirled in the background of all these high-profile matches, until finally, Blom exited the shadows and signed a sponsorship deal with PokerStars in late 2010. The reveal came at the following year's PokerStars Caribbean Adventure.

The loss of anonymity did little to slow Blom as he blasted away at the highest stakes both in pot-limit Omaha and no-limit hold'em, even dabbling in some mixed games. He was at times a big winner and at times the source others' bankroll boosts.

But it seemed no amount of swing could slow his thirst for nosebleed action. In fact, Blom participated in every single one of the five biggest pots in online PLO history.

Ultimately, before the tracking data stopped in April 2018, HighStakesDB reported Blom to be a $1.8 million winner.

Tournament Moonlighting and the SHRB

While most famous for his cash game exploits, Blom has always dabbled in a tournament here or there.

He showed off his live chops a bit with an €850K victory in a partypoker LIVE MILLIONS Main Event back in 2018 and has just shy of $3 million in cashes overall.

It seems the Super High Roller Bowl Online has lit the tournament fire back under him, and with nosebleed cash not the playground it once was, that's not much of a surprise.

As has become a tradition for Blom, he's storming the field and upending the establishment in yet another form of high-stakes poker, leading the points leaderboard with the series just about halfway complete.

And the biggest prize of all still awaits. On June 1, the $102,000 Super High Roller Bowl will begin. With $3 million guaranteed and the ability to go in on fire after crushing the rest of the series, Blom appears to be a likely participant.

Given his history of rising to the biggest moments in the biggest stakes, Blom will certainly be a player to keep an eye on. Can he add his name to the list below, which includes some of the biggest live tournament wins in recent years?

Find out by tuning in to PokerGO and following along the live coverage, right here on PokerNews.