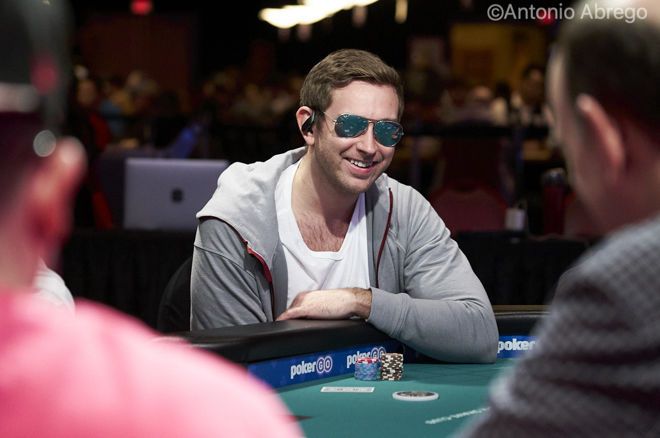 Three Main Events in this year's Spring Championship of Online Poker have seen their champions crowned, with Connor "blanconegro" Drinan securing his fifth SCOOP title of the year while the No Limit Hold'em Main Events have all reached their final tables.

There was plenty of excitement at the online felts, with both Ben "Spraggy" Spragg and Lex Veldhuis attracting record Twitch viewers during their Main Event runs, with big names still present in the other two Main Events also.

Out of 46,238 runners in the SCOOP-74-L: $109 NLHE [8-Max, Main Event], $3M Gtd, just nine remain in contention for the $434K first-place prize. On Day 3, they navigated through 159 remaining runners to put themselves in contention for that amazing return on investment.

For auercan, the big move came with around 30 players remaining in a three-way all-in spot. They already had a chip lead, but winning with nines against ace-king and ace-queen for a double knockout nearly doubled their stack and rocketed them far in front.

They didn't play many huge hands after but were able to cruise to the chip lead.

Two notable known names have also advanced to the final table in "LOL_U_91" and Manuel "young_diam18" Blaschke. While "LOL_U_91" held the chip lead for a while during the closing stretch, they sit in fourth and seventh, respectively, so have some work to do to catch the top stacks.

The massive size of the field means not many known players even made Day 3, but a couple who did only to fall short of the final table were Joep "Pappe_Ruk" van den Bijgaart and Dietrich "2pacnrw16" Fast, the latter falling in 37th.

The remaining competitors resume play Wednesday at 1 p.m. EDT with more time still remaining in the 2M/4M level and $28,981 locked up for ninth place.

Day 3 of the PokerStars 2020 Spring Championship of Online Poker 74-M: $1,050 Main Event came to an end after less than six hours with the field reduced from 79 players to the final nine players. The 6,475 entries created a total prize pool of $6,475,000 but the lion-share of that money will be handed out at the final table which will start at 1:05 p.m. EST on Wednesday, May 20. The eventual champion will not only walk away with the title, bragging rights, but also that incredible first-place prize of $920,067!

Standing proud at the top of the counts is Belgium's Michael "merla888" Gathy with 144,897,516 in chips. Gathy already has three SCOOP and three WCOOP titles but none of them are in any of the Main Events yet. Gathy came into the top of the counts towards the middle of the day and never really strayed far away from the chip lead but cemented it only further during the last four levels of the day. He eliminated "Those_Bros' and "xiaohuangzai" and won hands here and there but didn't really bust anyone after that. He just kept picking up pots and especially during the final table bubble, he kept putting the pressure on the rest to earn almost a third of his current stack.

The final table of the 2020 PokerStars Spring Championship of Online Poker (SCOOP) SCOOP-74-H: $10,300 NLHE [8-Max, Main Event] is set. Nine players, representing eight different countries, remain in contention for one of the most-coveted titles in the world of online poker and the lion's share of the $6,090,000 prize pool.

Leading the charge is Belgian poker player Pieter "XMorphineX" Aerts, who was near the top of the counts all day long and ended Day 3 with a stack of 38,539,059. High Roller regular Daniel "Oxota" Dvoress follows in second place as a late surge propelled the Canadian to a stack of 28,570,379.

Brazil's Pablo "pabritz" Brito sits in third place with a stack of 20,514,267 and enjoys a fabulous year so far as he won the $10,300 MILLIONS South America Main Event for $1,000,000 and also took down the inaugural online edition of the Irish Open for €462,100 after defeating Andras Nemeth in heads-up. On top of that, Brito already has a SCOOP title to his name from 2019 and will certainly aim to make that two by tomorrow.

Huge Viewership for Veldhuis and Spragg on Twitch Streams

Among the 40 contenders at the start of the day were also the PokerStars ambassadors Ben "Spraggy" Spragg and Lex "L. Veldhuis" Veldhuis who streamed their sessions on Twitch and hit huge viewership numbers. Spragg had some 17,000 viewers and the deep run of Veldhuis attracted even more than that. Both were on the same table when the action recommended and some banter ensued, Spragg even tossed virtual tissues to Veldhuis and Benjamin "bencb789" Rolle.

While both scored early double ups with their short stacks and secured two pay jumps, the inevitable clash would eventually happen. Spragg defended his big blind against a button raise by Veldhuis and jammed a six-high flop with ten-six suited only to get shown the rockets by his fellow ambassador. Two bricks later, Spragg was eliminated in 30th place.

Veldhuis navigated his short stack to the final two tables and eventually ran out of steam when he jammed with ace-seven into the ace-king of Rolle and the pocket tens of Jack "Swaggersorus" Sinclair. Rolle rivered an off-suit king to remain in contention as Veldhuis departed in 15th place.

The final table will recommence on Wednesday, May 20th, 2020, as of 1.05 p.m. Eastern Standard Time to play down to a champion and the PokerNews live reporting team will be there to provide all the action from start to finish.

Connor "blanconegro" Drinan has officially made history with his fifth tournament win in the 2020 PokerStars Spring Championship of Online Poker, topping a field of 159 in the three-day-long SCOOP-75-H: $10,300 PLO [6-Max, PLO Main Event], $1.25M Gtd to win the top prize of $322,264. The win came less than a week after Drinan tied Shaun "shaundeeb" Deeb's single-series record of four victories, meaning he only had to share the podium for a handful of days before finding a place in the record books all to his own.

Not one for tweeting about poker tournament wins but feels somewhat mandatory after shipping scoop #5 of the series… https://t.co/ELQOrQTDO2

Drinan's victory came after a roller coaster of a heads-up match with Jens "Jeans89" Kyllonen that lasted for two full hours and saw both players spend significant amounts of time as the chip leader. When all was said and done, Drinan was the one with all the chips for the fifth time this series and the second time in a high-stakes Pot-Limit Omaha SCOOP Event after taking down the $5,200 Event #40-H just nine days ago.

Also at the final table was third-place finisher Joao "Naza114" Vieira, who fell just short of his second SCOOP title of the series. This marked the third time he finished in the top four in a SCOOP-H event in the last week, having also recently taken second place in Event #62-H for $102,900 and fourth in Event #52-H for $240,744.

The three-day tournament came with a guaranteed prize pool of $750,000, though that number was smashed by a wide margin, amassing an official prize pool of $1,112,000. The prize pool was shared across the 143 players that made it into the money, a feat that was accomplished in the early stages of Day 2.

Chouity came into the final day sitting 12th in chips out of the 18 returning players and won a few early hands to keep that sack at bay. From there he steadily gained chips before taking a huge hit right before the start of the final table.

It was there where Chouity gained back momentum winning crucial double-ups before becoming the eventual champion after he overcame a massive 4:1 chip deficit to defeat Sweden's "BomPang" in heads-up action.

Donning the flag of Ukraine, “The_Truht” started the day 11th in chips out of the 18 players who converged to compete on Day 3. They rose toward the top early as the eliminations started coming quickly from the get go.

Start of day chip leader Billy "b8chatz" Chattaway, succumbed in 11th place after having a rough start to the day and was not able to recover fully.

Finding the chip lead in this star-studded field at the end of Day 1 was Juan "Malaka$tyle" Pardo who bagged 4,225,689 in chips. Pardo is an accomplished player with over $3.7 million in live earnings. Last year, he won back-To-back High Rollers At EPT Barcelona in a span of just over 24 hours.

Pardo was steadily building throughout most of the day but he really caught fire at the end of the night when he scored multiple crucial eliminations in a row. First, his pair of fours held against Andras "probirs" Nemeth's queen-eight suited to eliminate Nemeth and shortly after, he took out "RickLogrado" when he flopped a set of jacks against Logrado's queens in an all in preflop situation. The next level, Chun Lei "SamRostan" Zhou was his next victim when he shoved pocket sevens into Pardo's ace-queen suited. The flop brought a queen and Zhou couldn't recover.

Pardo's nearest competitor is Linus "LLinusLLove" Loeliger with 3,615,128 and Brunno "botteonpoker" Botteon sits in third with 3,021,971.

The chip lead honors went to Sami "Lrslzk" Kelopuro who managed to finish the day with a 3,580,257. Kelopuro is well-known for his cash game appearences in the nosebleed stakes, while he already has two SCOOP titles in the past, among which a Main Event title during 2011 SCOOP. His chip lead is secure enough, as "JBHInfinity" follows on second place with 3,052,674, more than half a million chips less than the leader. The Brazilian Pedro "pvigar" Garagnani rounds the top three stacks with 2,757,329.