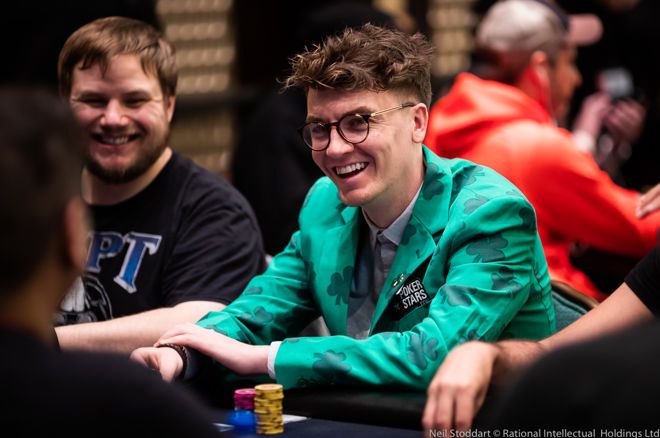 On one of the biggest nights in online poker of the year, the PokerStars 2020 Spring Championship Of Online Poker (SCOOP) Main Event Sunday, a ton of exciting stuff happened. Among the champions crowned were PokerStars ambassador Fintan "EasyWithAces" Hand, who outlasted his opponents in SCOOP 69-H: $1,050 Afternoon Deep Stack for $73,653. Charlie "Epiphany" Carrel won his third career SCOOP title in SCOOP 70-H: $530 Progressive KO for $67,469 plus a massive first-place bounty of $43,912.

The biggest event on the calendar, SCOOP 74-H: $10,300 NLHE Main Event got whittled down from 564 to 202 players on the first of four days. None other than Calvin "cal42688" Anderson sits in pole position, with big stacks for Jack "Swaggersorus" Sinclair and Pieter "XMorphineX" Aerts as well.

It was a relatively short day in the NLHE SCOOP Main Events as the marquee events are stretched out over four days. Late registration for all three tiers will be open right up until the start of the second day, which means total prize pool and prizes will be announced once registration closes.

The Low edition has already drawn an astonishing 43,109 entries, each ponying up $109 to create a prize pool of over $4.3M already. 11,052 of them made their way to Day 2, and it's "anarkevich" from Belarus who holds the overall chip lead after Day 1.

The medium edition came with a lofty guarantee of $5,000,000 but that one was smashed already as 6,094 entries have created a prize pool of more than $6M already, with late registration still open. Needless to say, it was a feast of recognition as the big names and plenty of hopefuls duked it out in the $1,050 edition of the Main Event.

"Fenryr03" of Moldova sits on top after Day 1, with online superstar Patrick "pads1161" Leonard not far away from the top spots.

Follow along with the SCOOP 74-M Main Event here

A very familiar face of the SCOOP series sits atop the leaderboard after 15 levels of 30 minutes each as Calvin "cal42688" Anderson, Mexico-based mixed game specialist from the United States, already had 10 titles under his belt heading into the 2020 edition. A late surge vaulted Anderson into the top spot as he accumulated 2,732,146, some of which came in a pot against Ilya "Leqenden" Anatsky in the final level of the night when the Belorussian was bluffing with queen-high into a jack-high flush.

Don't miss a beat from the SCOOP 74-H Main Event!

There's no shortage of offerings for PLO-aficionados during the SCOOP, but the tastiest sampling of them all was on tap last night as three Main Events ($109, $1,050, and $10,300) got their cards in the air.

The low edition has already drawn over 6,000 hopefuls, with 873 making it through to Day 2 "pokerpædagogen" of Denmark is in the lead, while notables Denis "aDrENalin710" Strebkov, Tyler "wonderboy222" Goatcher, and Julian "jutrack" Track also bagged big stacks.

In the medium edition, 253 out of 995 players made their way through to Day 2, with late registration still open up until the start of the second day. Ignat "0Human0" Liviu is second in counts after Day 1, with only "icekey88" surpassing the Romanian high-staker on the leaderboard.

It was an extended Day 1 over the course of 15 levels that saw 136 entries into Day 1 of SCOOP-75-H: $10,300 PLO (6-Max PLO Main Event). When the day was complete, only 31 players remained to move on to Day 2 and Linus "LLinusLLove" Loeliger wound up as the chip leader. Late registration is open up until the start of Day 2 to possibly make the field even bigger.

Loeliger finished the day with a stack of 2,905,441, most of which came in a massive pot in the last level of the night. Loeliger got tangled up with Christopher "Apotheosis92" Kruk in a three-bet pot that exploded on the turn. Kruk called off the majority of his stack on the turn but folded to Loeliger's shove on the river. Loeliger put it in cruise control from there while Kruk will be forced to re-enter tomorrow if he wishes to pursue the title.

The field was stacked with many recognizable pros throughout the day and many of them are still sitting near the top of the leaderboard. Gavin "gavz101" Cochrane finished the day in second place with a stack of 2,748,705 while Talal "raidalot" Shakerchi rounded out the top three with 2,166,252 chips.

Check out all the updates from the Pot-Limit Omaha SCOOP Main Event right here!

Day 1 of SCOOP-73-H: $2,100 NLHE [Sunday Warm-Up SE] is in the bag, and so are the virtual chips of the 37 remaining players from a total field of 501. Though the tournament began nine hours ago with fewer players in their seats than survived to Day 2 (36), late registration brought interest that comfortably surpassed the $750,000 guarantee: the final prize pool totalled $1,002,000, with $177,965 set aside for the eventual winner.

Leading the Day 2 players (who will reconvene to play to a winner at 6:05 pm WET/1:05 pm ET on Monday) is “zivziv” with 3,684,880 chips, half a million clear of current second place“boerni21”. The latter had risen to the top of the counts mid-way through the day, only relinquishing his grip on the top spot during the last levels. Stefan "baeks22" Schillhabel lies in third, with 2,933,699 chips; the only other players to have finished the day with over two million chips are Mustapha "lasagnaaammm" Kanit and Pavel "silentm0de" Plesuv. Kanit had an especially dramatic end to his Day 1 run, out-flipping Joao "Naza114" Vieira in a huge ace-king vs. queens pot (all in preflop). His spike of two pair eliminated Vieira in the closing minutes of the day and propelled him into fourth in chips overall.

Follow along with the Special Edition of the Sunday Warm-Up

The first event of the SCOOP is finally drawing to its conclusion as the Phase event with many starting days had their Day 2 yesterday. In SCOOP-01-H, 27 out of a field of 11,933 made it through on the penultimate day, each of them locking up $5,715 already. The biggest slice of $225,009 will be up for grabs on Tuesday, and it's "chininhaltig" who has the best papers to do so as the chip leader.

Luke "Bit2Easy" Reeves, Michael "merla888" Gathy, and Shawn "buck21" Buchanan will also be back on the final day.

Besides the big Main Events that kicked off, there was plenty of other action at PokerStars. Check out all the winners from Day 18 right here!

Twitch-streamer and PokerStars ambassador Fintan "EasyWithAces" Hand scored a massive victory on Sunday night in front of a jubilant Twitch-chat (and saving Benjamin "Spraggy" Spragg's Sunday in the process). Hand finished the tournament in style by clicking the check/call any button, expecting heads-up opponent Antoine "A.Saout" Saout to do exactly what he ended up doing. Watch the clip below!

There was a third SCOOP-title for Charlie "Epiphany77" Carrel on Sunday night, who defeated a field of 2,112 hopefuls for a six-figure ship. Carrel won the SCOOP Main Event back in 2017 and recently did an in-depth sitdown with PokerNews to talk about all things SCOOP and what he's been up to lately.

A massive $150K was collected by Sweden's "WhatIfGod", who won his second SCOOP-title of the 2020 series by winning the late-night Turbo Sunday Cooldown. Nearly half of the prize came by collecting bounties along the way, including his own massive bounty at the end. "WhatIfGod"'s earlier victory this series was also in a Turbo PKO event.

Events Scheduled on May 18