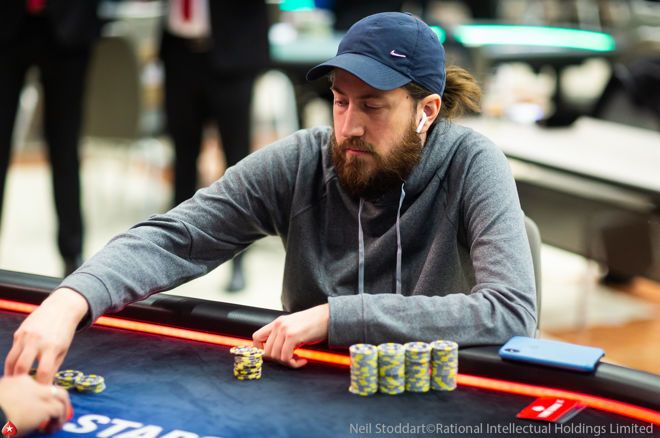 Day 14 was a massive day at the PokerStars 2020 Spring Championship Of Online Poker (SCOOP). The $25,000 Super High Roller crowned a winner in none other than high stakes legend Steve "Mr. Tim Caum" O'Dwyer, while the 'Beaker-army' of popular streamer and PokerStars ambassador Lex "L. Veldhuis" Veldhuis went nuts when their champion made it to the final 20 of the $5,200 High Roller.

Andras "probirs" Nemeth finished runner-up to O'Dwyer in the 25K High Roller for an incredible $403,096 payday. His hunger wasn't stilled, though, as Nemeth wrapped up SCOOP-52-M: $2,100 NLHE after for $157,735. An incredible day for the Hungarian professional, who won his third SCOOP-title and over half a million dollar total.

A total of nine champions were crowned on Wednesday, while several other interesting tournaments will be played out tonight. Read everything about what happened in the digital waters in our daily SCOOP recap!

O'Dwyer has already collected over $6 million in online cashes and $30 million in live tournament cashes, this poker superstar has been around for a while and can always be found at the top of the results in any of the tournaments around the world and online.

A crucial hand towards O'Dwyer's victory happened with seven players remaining. Short-stacked, the American transplant four-bet shoved all-in with ace-queen after Ole "wizowizo" Schemion had opened and Nemeth had three-bet. Schemion then five-bet shoved pocket kings all in, only to be met by a snap call from Nemeth with pocket aces. The flop, however, brought two queens to secure a triple-up for O'Dwyer, while Schemion was gone in seventh.

O'Dwyer rode that good fortune all the way to a three-handed battle with Nemeth and Chun Lei "SamRostan" Zhou that lasted for several hours. Nemeth then took out Zhou and started the heads-up with a 2:1 chip lead, but O'Dwyer got back into it to overtake the lead. In the final hand, Nemeth's ace-king fell to O'Dwyers king-ten when the latter rivered a ten to secure the victory.

It was a long day at the online tables for all those what wanted to ensure a slice of the $1,000,000 prize pool in the latest PokerStars 2020 Spring Championship of Online Poker Event High Roller event. Ultimately it took nearly eight and a half hours to whittle down a field of 184 entries to the final 20 in SCOOP-57-H: $5,200 NLHE [High Roller] and conclude Day 1 once the money bubble had burst.

Among those returning for Day 2 will also be PokerStars ambassador Lex "L. Veldhuis" Veldhuis and he has the fourth-biggest stack out of all those that advanced with 4,421,903 to his name. The Dutchman streamed the action and unlike previous High Roller tournaments of the 2020 SCOOP, he entered late and all three major setup hands in the later stages ended in his favor this time.

Veldhuis scored a massive pot when he turned quads sevens to beat the top full house kings over sevens of Samuel "€urop€an" Vousden. His straight and flush draw then got there to crack the aces of Naoya "nkeyno" Kihara and he turned a king-high straight with a flush draw to send Juan "Malaka$tyle" Pardo with a set of nines to the rail.

Three players in particular dominated the bubble action as Canada's "BOOGANDEHAH" (6,312,129), Dutchman Job "DeadNylan" Greben (5,860,740), and Hungary's "xnrobix" (4,999,639) hold the top three spots. Plenty of other notables are in contention, however, and it won't be an easy ride for any of the remaining 20 contenders to earn the next SCOOP title.

Stay on top of all the action in the $5,200 High Roller right here!

Day 1 of the PokerStars 2020 SCOOP-58-H: $2,100 NLHE [Heads-Up] is over, and after more than seven hours of play, there are just eight players left in the field. Those are the players that won all their heads-up clashes and managed to reach the end of Day 1, securing a place into the money and returning tomorrow for a run into the first prize.

The event had a cap of 128 players and 119 were registered at the start of the day, with no late registration available. The guaranteed prize pool was $200,000 but the event managed to surpass it, reaching 238,000. Many familiar names managed to advance to Day 2 and the list consists of Joris "BillLewinsky" Ruijs, Dominik "Bounatirou" Nitsche, Francisco "Tomatee" Benitez, Connor "blanconegro" Drinan, "CatLover666", "Grindation", "fetopoker1", and "wubblepig".

The exciting heads-up battles recommence at 2:15p EDT. Follow along here for all live updates of this event!

Besides O'Dwyer and Nemeth, seven more players were crowned SCOOP-champions on Wednesday. Here are all the results from the non-live reported tournaments.

Andras "probirs" Nemeth missed out on his third SCOOP title in the 25K High Roller but had another ace up his sleeve on Wednesday. In SCOOP 52-M: $2,100 NLHE [8-Max], the Hungarian pro did close it out, defeating a 440-player field to add $157,735 and a title to an already incredible night.

Ireland's "ArtHouse2011" finished runner-up and received $117,239, while Sergi "srxakgirona" Reixach had to settle for bronze and $87,141. BOOGANDEHAH finished in fifth place on top of grabbing the chip lead in the $5,200 High Roller.

Joris "BillLewinsky" Ruijs finished runner-up for $80,160 while also making the final eight of the $2,100 Heads-Up, which will play out on Thursday.

Events Scheduled on May 14

Five new events with three tiers each will kick off on Thursday, May 14, while PokerNews live coverage will be right on top of three of the events that finish tonight as well.

Want to join in on the poker fun? Download PokerStars today and jump right into the action!