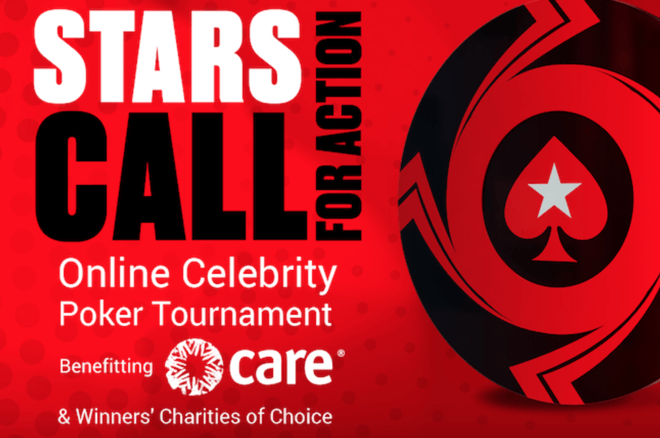 This Saturday at 2 p.m. EDT, PokerStars will play host to the “Stars Call for Action” charity event featuring dozens of A-list celebrities.

Amy Schumer, Bryan Cranston, Michael Cera, Jon Hamm, Neymar Jr., Don Cheadle, Jeff Garlin, David Schwimmer and Edward Norton are among those confirmed to play the “Stars Call for Action – Powered by PokerStars,” which will be live reported here on PokerNews. It will also broadcast live on Twitch, Facebook, and YouTube.

The celebrities will be playing to raise funds for relief efforts during the current global pandemic crisis. PokerStars will donate $1 million for the prize pool, and the top finishers will direct portions corresponding to their finish to a charity of their choice.

Half of the prize pool will automatically go to CARE International, while the other half, including donations from fans, will be distributed via grants to charities and will be administered by the Entertainment Industry Foundation (EIF), a Charity Navigator Four-Star Charity that meets all 20 BBB Charity Standards.

Get in on the Action

What’s more, players and fans will have a chance to get in on the action as for each celebrity that plays, PokerStars will invite one randomly-selected fan to join the tournament in a separate field. The two fields – celebrities and players – will then play down to their respective final tables and combine for the ultimate showdown. Celebrities who get knocked out early will be added into a side event where the winner will direct 10% of the total to charity.

"We are delighted to show how the game we love can be used to bring people together and do good."

James Hartigan and Lex Veldhuis will host the stream, which will see the celebrities show their faces via Zoom. Viewers will not only have the chance to watch all the action, but they can also help support the cause via a “Donate” button on each platform.

“This event began as a simple conversation between our team, Hank, Andy and the Entertainment Industry Foundation as a way to create positive entertainment and raise support for critical causes during these challenging times,” said Rebecca McAdam Willetts, associate director of public relations at PokerStars. “We were thrilled that they came to us and have been blown away by the momentum it’s gained. With people increasingly using our products to connect, compete and stay social while safe at home, we are delighted to show how the game we love can be used to bring people together and do good… with the added bonus of surprising some poker fans along the way.”

The online charity event was the brainchild of Azaria and Bellin, who was recently a guest on the PokerNews Podcast. The pair basically wanted to expand their home game to help during the current crisis.

“This event is a great way to combine genuine giving where it's needed with a way to stay home and yet still connect with people from around the world," said Azaria in a press release. "A friendly game of poker reminds us how life used to be, which hopefully we get back to soon."

He continued: “It's a way for people to interact for a good cause and enjoy themselves at the same time. The response has been really great, and I'll tell you, when PokerStars stepped up like that, I was actually kind of moved by it. We were hoping they'd put in some money, but to basically finance the whole thing to the tune of a million dollars, is pretty incredible.”

Poker fans will be able to follow the PokerNews Live Updates here.

This event is a play money event, with no real money prizes awarded to any players. Donations will be made on behalf of top performers. The Stars Group owns a majority shareholding in iBus Media.