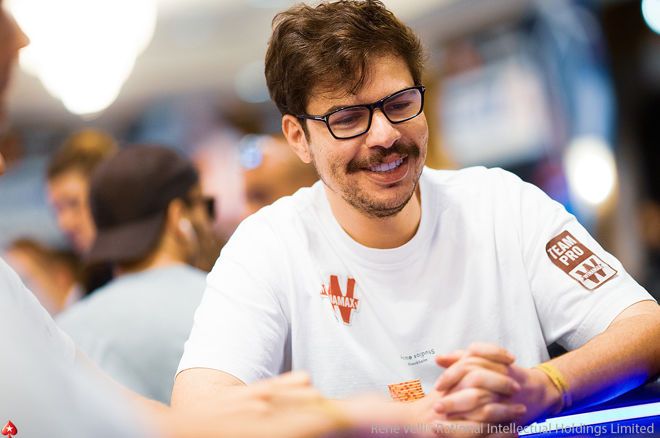 A mouth-watering $95 million in guarantees is up for grabs among 80 events in this year's 2020 Spring Series of Online Poker (SCOOP) on PokerStars, each featuring their own low, medium, and high buy-in for a total of 240 poker tournaments. This year, PokerNews will be right on top of all the action with live reporting of 30 tournaments.

Last week PokerNews spoke with Charlie Carrel about his SCOOP Main Event victory back in 2017, and we're lucky to be able to speak to another former Main Event champion in the shape of Mustapha Kanit.

Known as "lasagnammm" online, Not only is the Winamax Team Pro a former SCOOP Main Event champion, winning $1,304,720 after defeating Emil "Maroonlime" Patel heads-up back in 2015, but earlier this week he added a third SCOOP title to his poker resume.

Kanit says that the victory came during a real period of success for him, coming less than a month after shipping the 2015 EPT Grand Final €50,000 Super High Roller for €936,500

"It was just a really great time of my life," Kanit told PokerNews. "Monetarily it didn't change anything, but it was my biggest score definitely."

"Everything went to bankroll or investments! It was for sure an achievement because I really cared about winning the tournament. I had a lot of success online, and I was sure I was one of the best!"

The final table was "quite a hard one," says Kanit, but he admitted he got lucky with a big flip to stay in contention.

"I think I played very well," he said. "I remember that I didn't take too many risks. I played some good poker and it was a really great moment. Just everything felt right."

"Italians love the [SCOOP] Main Event; Gianluca [Speranza] won it twice after me so it's definitely one of the tournaments that I love the most"

Immediately after scooping the largest prize of his poker career, the Italian was heading on holiday to relax and unwind.

"April and May is such a busy time; for two months you're playing every single day, especially with the European Poker Tour in Monaco and then SCOOP. It's very energy-consuming.

"It's about finding a balance with yourself and being able to deliver in the tournaments that matter."

"Afterwards I take a big break before going to Vegas. Otherwise, you burn out in the middle of the Series, something I remember having issues in the past with.

"It's about finding a balance with yourself and being able to deliver in the tournaments that matter."

"Take Your Time; Ponder Your Decisions"

With this year's SCOOP Main Event coming up on May 17, Kanit has some poker tips for anyone jumping into the tournament.

"It's a big tournament, but it's also a long tournament," said Kanit. "You're not going to win it on Day 1 or Day 2, so take your time and ponder your decisions. Think about it and weigh the up-side and the down-side.

"If you need to deviate from your strategy, sometimes you need to make decisions you're not happy with and that's fine. Just think about the overall picture.

"Focus on your experience and on enjoying your tournament because that's important too. Good luck everyone!"