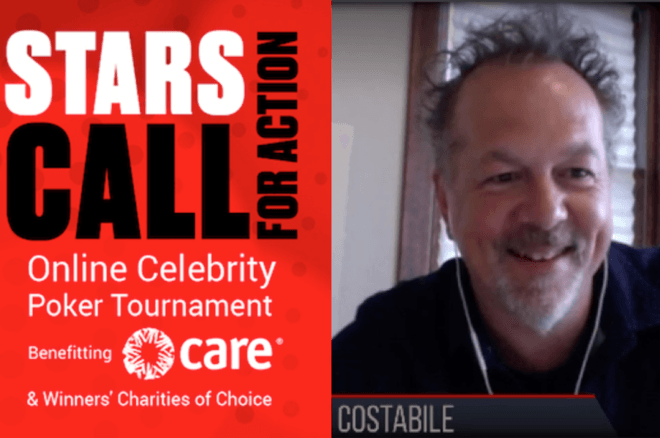 On Saturday, PokerStars played host to the “Stars Call for Action” charity event and saw David Costabile, who played Gale Boetticher on Breaking Bad, defeat a field chock full of A-list celebrities – including co-stars Bryan Cranston and Aaron Paul – to win $100,000 to donate to World Central Kitchen, a charity that supplies food to those who most need it.

Just for participating in the tournament, which was organized by Hank Azaria and Andy Bellin, $10,000 was donated to charity on behalf of each celebrity. The final six then received bonuses for their respective charities.

In the end, the title came down to Costabile and Brazilian footballer Douglas Costa, who entered heads-up play with a big chip lead. Even so, Costabile, who currently plays Mike “Wags” Wagner on Showtime’s hit show Billions, scored a couple of doubles to take the lead and then won a race with pocket fours against Big Slick suited to close things out.

The celebrities played to raise funds for relief efforts during the current global pandemic crisis. PokerStars donated $1 million to the prize pool, half of which went to Care International. The other half, including donations from fans, is slated to be distributed via grants to charities and will be administered by the Entertainment Industry Foundation (EIF), a Charity Navigator Four-Star Charity that meets all 20 BBB Charity Standards.

The tournament was played in phases that saw celebrity participants duke it out in a series of 6-max shootout tables. The winners from each then advanced to the 23-player finale where they were joined by six “regular” players who won their way in via an invite-only “Players Tournament.” They included Nick “OP-Poker Nick” Walsh, “pienososas,” Arlie “Prince Pablo” Shaban, “Raksha26,” Jack “Supafuz” Stanton, and Felix “xflixx” Schneiders.

Additionally, the celebrities that finished second at their shootout tables were invited to a special “Second Chance” tournament where the winner was awarded $50,000 to donate to charity. English footballer Wayne Bridge wound up winning that tournament to close out a fun day of festivities.

Check Out Oddschecker US today!